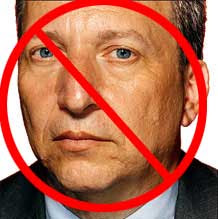 I just signed this petition asking that Obama appoint a Treasury Secretary who can clean up Wall Street, not one who helped deregulate it. Right now, the leading candidate for the post is Clinton administration official Larry Summers, who had a hand in reducing regulations on banks in 1999.

We can't fix this mess by handing control to the people who made it.

Also - he was the president of Harvard who got into hot water by saying women aren't as smart as men, and his name was on a memo written while he was at the WHO that said developed countries should dump their pollution on "under-polluted" countries in Africa, since the people there wouldn't live long enough to suffer the effects of the pollution, etc. etc. How about NO?!