I'm a big Trisha Yearwood fan. I have all her albums as CDs and ripped to my iPod (except the compilations they've made over the years mixing up the songs in different ways). I also own all three of her cookbooks. The latest, Trisha's Table: My Feel-Good Favorites for a Balanced Life

, came out this month, and I've tried three recipes so far. One winner, one huge loser and one maybe-try-again.

The best one we've tried was the "Neat Sloppy Joes" -- made with ground turkey, beans, fire-roasted tomatoes, onions and peppers. The sauce uses tomato paste, vinegar and a touch of brown sugar that made it super tasty -- and it was a big recipe so we ate on it for a supper and two lunches!

The major flop was "Broccoli Slaw Chicken," which is a recipe without a picture in the book. That's probably a clue that it's not a true winner/maybe is just filler in the book. (Also the recipe is not on Food Network's website, another indicator it's a dud all around.) In any case the picante sauce mixed with broccoli slaw (broccoli, carrots and cabbage, which I bought pre-shredded) and cooked made for a disgusting bite. We barely ate the chicken the first night, and the leftovers sat in the fridge until I finally gave myself the grace to toss them out.

The maybe-try-again is "Raspberry Chicken." We didn't like it very much, although the sauce was OK. I would want to try again because I didn't have the mushrooms the recipe calls for. I bought them, but when I started making the chicken the mushrooms had gone bad in the fridge (my Winn Dixie's produce department is terrible and I should really get my act together and shop at the weekly farmer's market ... but that's another issue). It was edible, and I think we ate the leftovers too. Definitely not a favorite, make-every-week kind of recipe.

Related: I'm way late to the party, but I've just found Cook's Country and America's Test Kitchen on Amazon Prime/PBS and have gone down a wormhole watching those (with a notebook in hand to write down recipes and techniques as they show them). I'm going to be trying a few new things I think. Meal planning and cooking has become SUCH a chore for me. I hope this will infuse some new spark and make it more fun again...

Do you have any new recipes you can recommend?

Today marks the 20th anniversary of the bombing of the Alfred P. Murrah Federal Building in Oklahoma City. I remember the lives lost, those who survived and those who are forever changed.

I was an eighth grader and in first period math class when the superintendent of our little school came in with the news. I think a TV was wheeled in and we were able to watch some coverage. My town is about two hours away from Oklahoma City.

A few weeks later our government (civics?) class took a field trip to the site, and we saw the building before it was completely demolished. I was caught up in my middle-school boyfriend/girlfriend drama (I vaguely remember that the boy I liked played a breakup song to signal we were through on this trip, but I could be mixing memories). But I do remember the awe of the devastation and all the stuffed animals and notes tucked along the chain link fence. Somewhere I have some prints of photos I took that day.

The memorial was completed before I left the state, but for some reason I have never been through it. I'm rarely in Oklahoma City proper, although I should make the time to visit it next time I go home.
at April 19, 2015 No comments:

I donated six hats to my church's silent auction, and I included a silvermari crochet business card with each hat. I don't think they all sold, but I know at least Grumpy Cat did. So, if you're checking out my site and are fellow member of St. John's UMC, welcome!

If you want to know more about my crochet, check out the crochet section. Otherwise this is just a site where I write periodically about things I'm thinking about, reading or watching. Hopefully I'm not too grumpy and there isn't too much that's completely embarrassing (to me, Shawn or Jane). It's a fine line to walk when you write about yourself on the Internet. 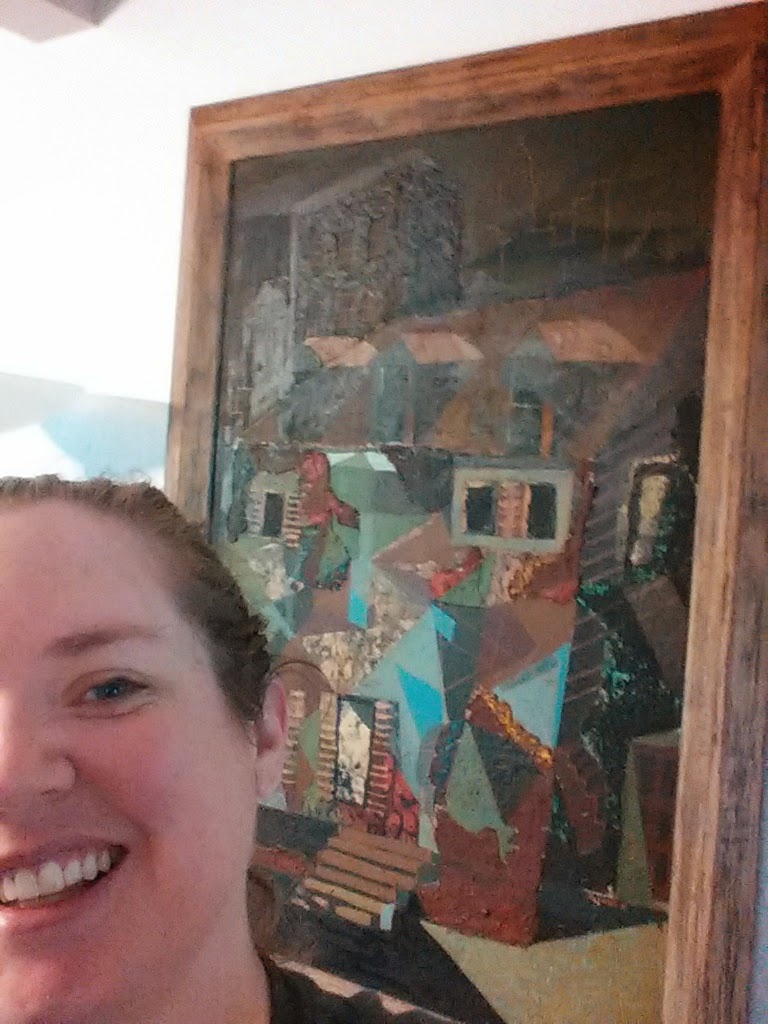 In time for Gran's birthday today we finally got the painting from her living room hung up in ours.

I love everything about it, but I would happily trade it to see it in her house again covered with family photos and her sitting next to it. (Painting by Great Uncle Dale McKinney)
at April 07, 2015 No comments:

A Stranger in the South

I'm not from the South. So I don't understand the value of making our kids say "yes, ma'am" and "no, sir" in every interaction with an adult. That's the style at Jane's school though. She doesn't bring it home or call me that, although she does tell me her teacher tells her to say it. Will she be in big trouble if I don't drill her in that social nicety? I do find myself falling prey to the "Ms./Mr. First Name" with people at church. That seems expected, although still weird to me.

We had her Easter party at school this week, and I got to observe the other moms of kids in the 2-year-old classes. Most knew each other, and knew each other well. Basically I got the impression that the typical mom fits the cliche "good Christian woman." It was the same recipe -- blown out hair, cute matching ensembles and multiple children in their arms also dressed up in smocked outfits and giant hair bows for the girls. And they all speak so sweetly, even though I could feel the undercurrent of "bless your heart" pulsing in that sweet talk. I didn't feel totally out of place, since Jane was there and she fits in great despite her decidedly un-smocked wardrobe and lack of giant hair bows, but it is very obvious that I am different. That may always be so...
at April 01, 2015 2 comments: