Our library's lapsit story time had a graduation "ceremony" today. The babies got to wear little caps, listen to "Pomp & Circumstance" and get certificates saying they moved up to toddler time. (Jane will probably be ready for toddler time once it starts up again in the fall.)

We have one more lapsit story time next week and then we have to decide if we take a hiatus or if we go to the story time with the big kids (all ages are jumbled together in the summer).
at March 27, 2012 No comments:

Everyone knows when you're pregnant you can expect a lot of advice.

What I didn't know was that I could ignore about half of it. Just because someone had a baby (including me) doesn't mean they know everything about raising one!

Some things that stuck to me were so random. Like someone told me I shouldn't get or make the cute closet dividers to separate Jane's clothes (newborn, 3 months, 6 months, etc.) because HER daughter's clothes never made it out of the clean laundry basket. So why waste the money?

For some reason I listened, and Jane's closet is a bigger mess because of it.

I will admit that I don't hang up much of Jane's clothes (mostly because the closet is a jumble thanks to no organization system on my part!), but I do put them away in drawers consistently (i.e., the basket system for baby laundry doesn't work for me).

Also I read a lot of "you'll never pluck your eyebrows again" or "you'll look upon a hot shower as a rare treat," etc. Maybe those will be true when I have a toddler (and/or an out-of-town husband), but right now I still have time for showering and whatever grooming I might feel like doing (which isn't much, but that's not a reflection of parenting/motherhood ... it's a reflection of my sheer laziness).

Some people mean well. Some people just want to make themselves feel better about their parenting choices. Some people are just know-it-alls who always have the right answer. And it might be possible for someone to be all three.

But I am finding more and more to trust the well-worn advice: "Trust your instincts. You know more than you think you do."

(But I still need to get Jane on a better sleep schedule/routine during the day!)
at March 21, 2012 No comments:

(Background: the baby nurses most vigorously on the side she starts on, so you want to alternate start side to help keep milk supply even.)

One thing the breastfeeding books and classes all seem to say is to use a safety pin on your bra and move it back and forth to mark which breast to start nursing on next time.

I hated the idea of a safety pin, mostly because I might only have one hand to grapple with it, and in the middle of the night (or really any time) who wants a safety pin so close to a baby's precious head?! Also even with both hands I'm never really good at opening and closing them.

So I started keeping track by just writing it down. I kept a notebook (as I think most new moms do) and wrote down EVERY LITTLE THING. (I think I read someone call it the Pee, Poop, Milk diary recently.) And so I just added a notation for which side I started with for each nursing session.

Round about Christmas time we were staying at my mom's house and there was no nightlight. So I didn't want to turn on the light just to figure out which breast to use (whereby fully waking up myself, my baby and my husband). So I just guessed/tried to use my memory.

But I've come up with a better solution, and it's been working great for me.

I found a rubber bracelet -- the kind made famous by Lance Armstrong's Live Strong cancer organization -- in a drawer in my room at my mom's house. This one was for breast cancer awareness (which is a whole other post -- I am all for funding more research but have a tendency to think market saturation has been reached for pink 'awareness' products ... and don't get me started on Komen/Planned Parenthood).

Anyway, I started using the bracelet as my marker of which side to start breastfeeding on. I never have to take it off -- it's not hurt when it gets wet. Really it's the only thing that's with me even more than Jane! And it's going to be visible in some of her photos from this year (many that I appear in I mean, including one of my favorites from Christmas). There's also no risk to me or the baby while I'm moving it/I can't accidentally injure her with it like I could with a safety pin.

I've only forgotten to switch the bracelet a couple times, and it's usually when I'm half asleep in the middle of the night or early morning hours. But it's a part of our nursing routine that I'll move the bracelet from one arm to the other.

I think there could be a market for such a bracelet (if someone isn't already selling them ... it looks like this is something similar). Instead of being cancer or awareness related they could be customized with the baby's name, a favorite color, a date, etc.

As for me, it's one less thing I have to remember, although as an avid note taker I was a little sad to stop writing down every little thing.
at March 05, 2012 3 comments:

My mom forwarded this. I doubt its authenticity, but it's funny-ish.

Louisiana Ghost Story (true story)
This happened about 6 months ago on Louisiana Hwy 57, just outside of Dulac, a little town in the bayou country of Louisiana , and while it sounds like an Alfred Hitchcock tale, it's real.

An Ohio business man, Saul Rubins, abandoned his disabled vehicle on the side of the road, and attempted to hitchhike. The night was pitch dark in the middle of a thunderstorm. Time passed slowly and no cars went by. It was raining so hard he could hardly see his hand in front of his face.

Suddenly, through the sheets of rain, he saw a car moving slowly, approaching and appearing ghostlike in the rain. It slowly and silently crept toward him and stopped. Desperately needing a ride, Saul jumped in the car and closed the door. Only then did he realize that there was no one behind the wheel and no sound of an engine to be heard over the rain.

Again the car crept silently forward and Saul was terrified, too scared to think of jumping out and running.. He saw that the car was approaching a sharp curve and, still too scared to jump out, he started to pray and beg for his life; he was sure the ghost car would go off the road and into the bayou and he would then drown!

But just before the curve, a shadowy hand appeared at the driver's window, reached in and turned the steering wheel, guiding the car safely around the bend. Then, just as silently, the hand disappeared through the window and Saul was alone again.

Paralyzed with fear, Saul watched the hand reappear every time they reached a curve. Finally, scared nearly to death, Saul had all he could take, jumped out of the car, and ran to town..

Wet and in shock, he went into Schmoopy's. Voice quavering, he ordered two cups of coffee, black, and then told everybody about his supernatural experience. The room became silent and everybody got goose bumps when they realized Saul was telling the truth and was not just some drunk. About 30 minutes later two Cajuns, dripping wet, walked into Schmoopy's and one says to the other,

Happens to be Dr. Seuss' birthday, so Jane wore her Horton onesie for the occasion: 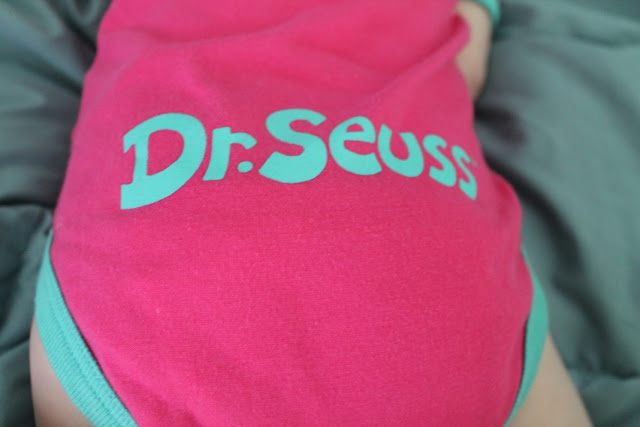