Raising Our Children, Raising Ourselves by Naomi Aldort

I read this book after seeing it recommended on a message board thread, which I found after googling something like "I'm so mean to my kid!" (Our bathroom battles have been epic.)

I like some of the book's advice and think treating your child as an individual and with respect is solid. But some of the other advice seemed unrealistic and like it would get out of hand quickly -- not that the child would manipulate or take advantage of the parent but that they'd never learn how to be part of a family unit, do their part of things, etc. Also you would NEVER get anywhere on time because her advice seems to suggest the kids can do anything they want, never interrupt them or redirect their activity.

There are more complete reviews on Goodreads that better describe what I mean/why I didn't love this book. (And they also link to a series debunking the author's credentials and an entire site about people who have been hurt by crunchy parenting.)

I didn't completely hate the book either though, and I've found myself trying to be more mindful with Jane and practice some of the S.A.L.V.E. method, which stands for Separate yourself from your child's behavior with a silent self-talk, Attention on your child, Listen to what your child is saying or what actions may be indicating, Validate your child's feelings, and Empower your child to resolve her own upset. I still probably help Jane solve problems more than she needs, but I also know we're securely attached and believe she knows how deeply she's loved even when I lose my temper. 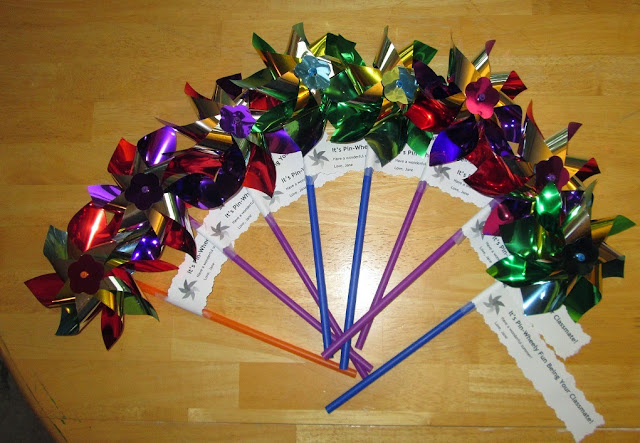 For Jane's end-of-the-year class party I found out we were invited/supposed to/allowed to bring little treats for the other kids in her class. I ordered some pinwheels from Amazon -- I got a dozen for around $5, and I attached a small tag that says "It's Pin-Wheely Fun Being Your Classmate." I thought this was VERY clever, and not something I'd seen on Pinterest (although maybe I missed it?).
at May 17, 2015 1 comment: 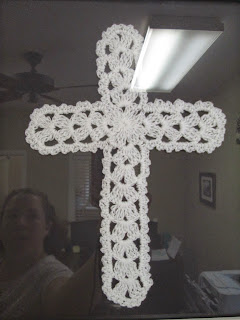 The admin assistant at church has created a cross wall in her office, and she asked for donations/loans of crosses.

I have so much thread that I decided to whip up a crocheted cross. I made it in less than an hour, although the pattern was tricky enough that it took me a few tries to get it started correctly.

I forgot to take a picture before I gave it to her to hang, hence the wild picture with reflection from the fluorescent light. It was really easy to make, although clearly I could have framed it better. (It's not mounted, just in a regular 8x10 frame, which is tight enough to hold it in place -- I hope!)

I have so much thread that I should come up with more thread projects. I wonder if I could crochet a top for Jane by holding a couple or three strands together. It's cotton and with the right stitch it could be quite nice...
at May 10, 2015 1 comment: 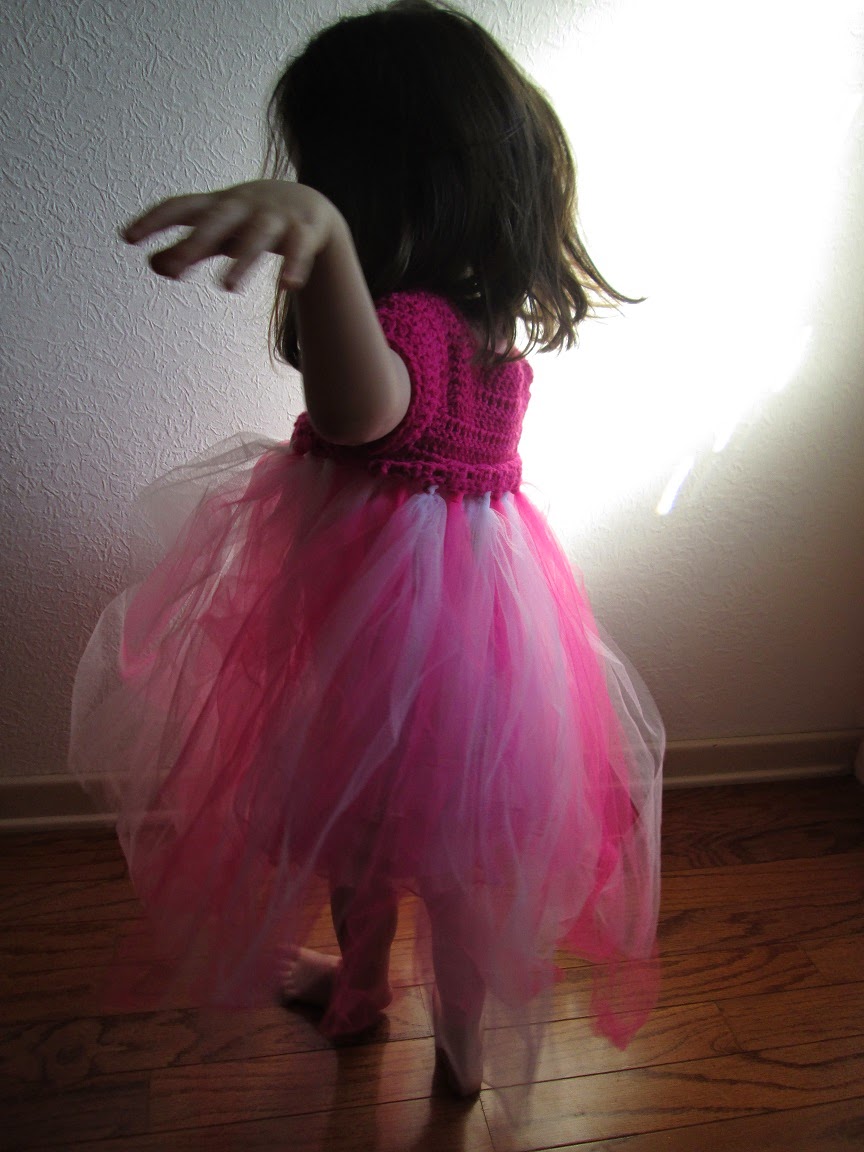 Oh Pinterest, how I've come to love you. At first I didn't understand or like it. I'm not that visual of a person, and I wanted more text -- to understand what was going on in the pictures. I still lean that way, but for crochet at least I've found some great things using Pinterest and love to browse. (It's the source for most of my hat ideas.)

One pin I found was from the blog The View From My Hook -- a free pattern for the Kassia Empire Waist Dress. It took me a while to get the tulle for the skirt. Walmart was almost entirely out of them, but I eventually made a trip to Michaels and found them (cheaper than at Walmart too -- $3/roll and I bought three, although I only used two on Jane's skirt).

For the top I used some stash Red Heart hot pink yarn. I thought I had more pink choices left over from my hat making time, but they must just be small remnants in my bag-of-yarn-balls. The top pattern was OK, although I really think a lighter weight yarn would be better and offer greater drape. After making Jane's cape and a couple jackets I definitely see the value of using smaller yarn for better clothes.

I misread the instructions on the skirt and didn't use two strips of tulle held together for each knot. I would have used the third roll if I'd done that, and the skirt would be even fuller. For a dress up, play dress it's plenty full I think. Jane loves it and said "It's so pretty!" the first time she saw it. I also could have been more precise in the strips' lengths -- they vary a bit, even though I trimmed them after the skirt was complete. Oh well.

I'm not sure if it's the yarn or the pattern, but row 9 of the top (which is below the row 8 where I added in the tulle skirt) flips up and exposes the tulle knots. I should probably add a row 10 to try to give it weight to hold down (or maybe blocking/ironing would get it to go the right direction). I probably won't do anything for this one, but I might try to make another one with a shorter skirt using the third spool of tulle I have left. I might use a different top pattern -- maybe the top of the swingset cardigan and have it button in the back? Possibilities are endless! 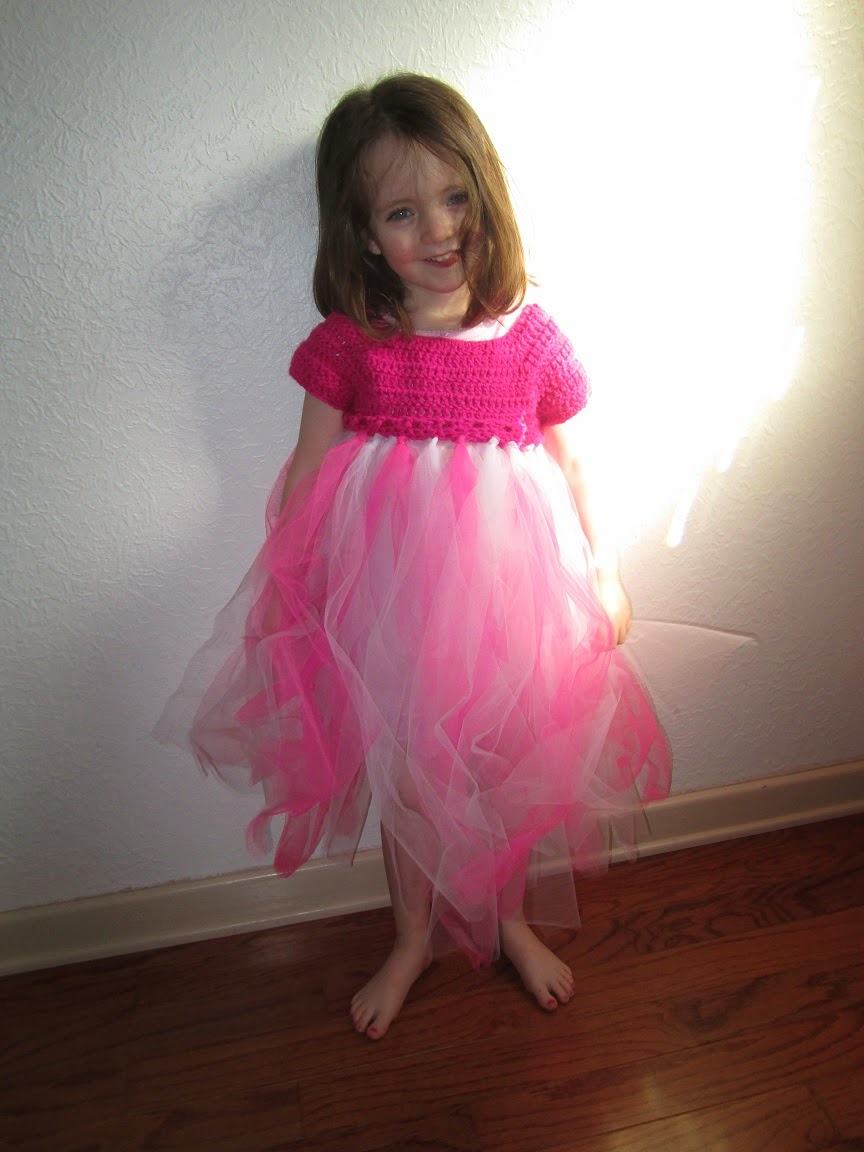 A friend posted some cute pictures of babies wearing mermaid tails on Facebook. She wondered if she knew anyone who could make such a thing. I raised my (virtual) hand and got to work with some stash yarn. It's been so fun. I love quick, little projects (and remember why I loved making all those blasted hats ... of which I probably have 40+ left!).

I found two free patterns: Mermaid Newborn Cozy and Mermaid Tail Cocoon. I kept crocheting, trying to get the waist the right size. Finally I think I got enough options and we'll see if baby girl can fit into one of them. I plan to get them in the mail today. I love the purple the best, but I think it's going to be too small. In the two bigger blue ones I added waist bands -- just a long chain woven between a row of double crochet to make it cinchable, on the off chance that I did get one too big.

I improvised the tops (and only made two because I think they're adjustable enough) -- just 3-4 rows of double crochet with a small double crochet row tied together in the front middle and long chains to add to the back. They are definitely just for show! 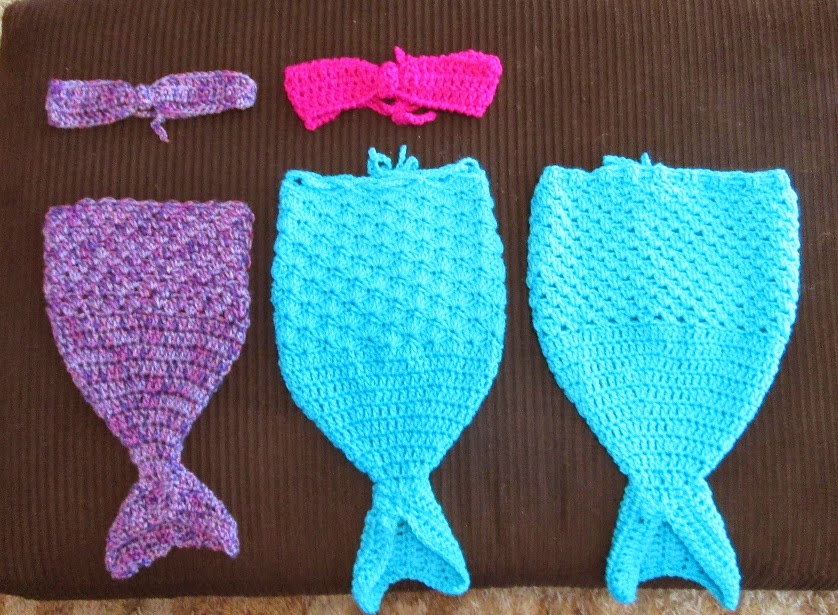