I watched Angels Sing, a Hallmark movie with Willie Nelson as Santa. No one prepared me for its sad themes. It was good, and I liked that the main character is a professor named Walker! And they lived in Austin! Maybe someday. I also really liked the singing, especially "Christmastime is Here." Wonder if there's a soundtrack. (LOL.)

I cooked all day yesterday and a bit today. We had a huge meal, the five of us -- Shawn, Jane, his parents and me. Here was the menu:
Ever time I cook here I swear it will be the LAST time. I can't find anything, there's not a sharp chef's knife anywhere, and it generally makes me stabby, ragey and upset. But it is nice to have a clean-up crew (my mother-in-law does all the dishes and cleanup).

I also made white velvet cutout cookies for the family get together on Saturday. We'll also take the second pan of dressing, although it's not right in any sense of the word. Boo hoo.

Jane opened more presents than necessary. Her favorite was a set of Daniel Tiger figures, and she's played a lot with them already. Precious.

I'm not sure if Jane is still a toddler at three, so maybe stuffing a preschooler stocking would be more accurate. I just wanted to list some of the things I have ready for her stocking this week (part of the ~30 pounds of gifts we brought on our trip that we'll have to bring back).
I think there are a couple other things in there too, but even though I just packed them up yesterday I can't remember. I'll find out on Thursday with her! Next I need to catalog what I bought myself for my stocking, although I didn't cart any of it with us so will just let myself have it all when we get home.

The Right Way to Celebrate?

Amidst the Christmas cheer and glad tidings of great joy I harbor confusion and crankiness.

I'm not sure I'm "doing Christmas" right. Not reverently enough. Not enough attention to Advent. Not even fully understanding Advent.

Christ already came, died and was resurrected. Shouldn't we be "Easter people" all the time?

In my attempts to do everything "right," for Jane, myself, our family, I wander ... or something. Trying to mold church tradition into my limited understanding and general doubts. Turning it over in my mind without it making any sense.

Shawn had to remind me that it's really about waiting for the second coming after I expressed my unease with this repetitive calendar cycle when nothing really changes. I know I'm approaching Christmas in the wrong way. And it makes me anxious.

Will I ever "get it"? There are sparks of clarity that are fleeting. My soul does cry out for Jesus -- come, Lord Jesus, come, even while he is here with me. How does that work?!
at December 21, 2014 No comments: 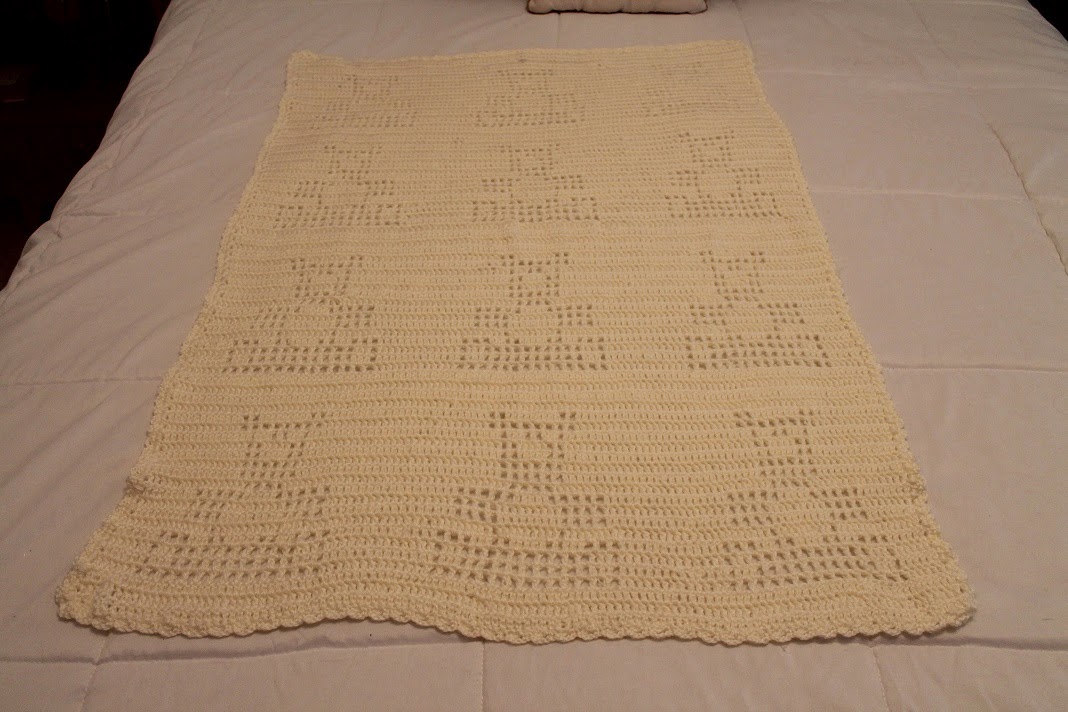 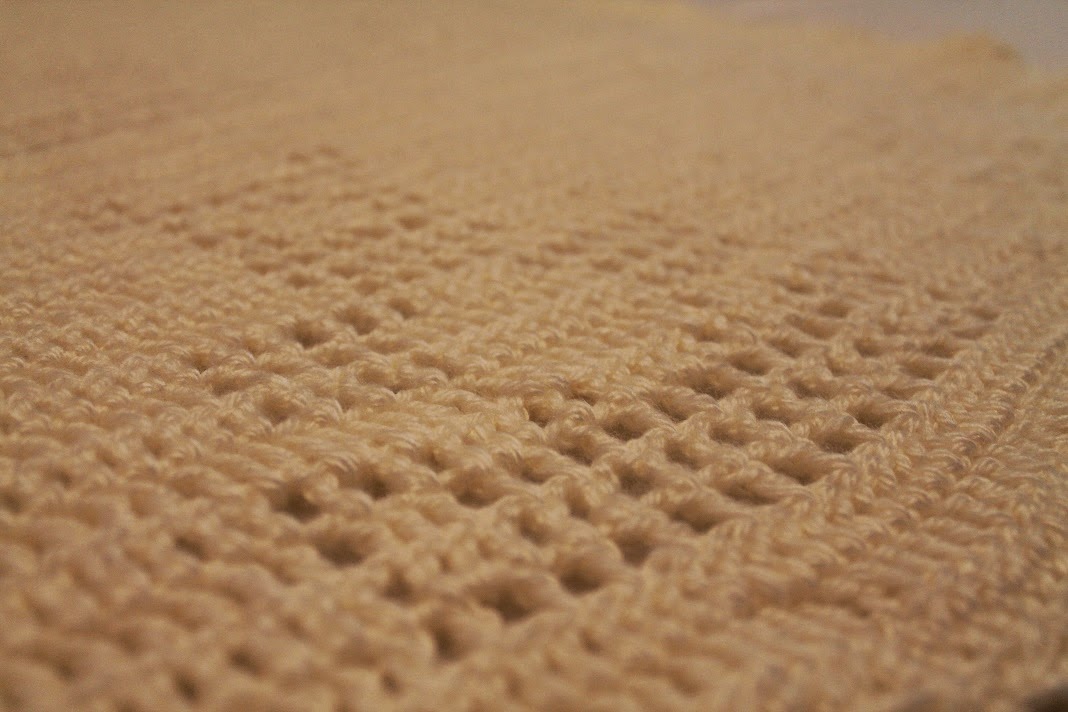 Made for a friend's baby girl due in January. I am going to take a break from crocheting, at least through the end of this year. It's one of my favorite things though, so I know I won't stay away for long. I already have yarn to make myself a hat (treat yo' self and whatnot).
at December 20, 2014 No comments:

Yesterday my Gran died. She was 90 years old and tired of being bedridden. She was at home with her family. I don't know what to do except write about it while I cry.

She's the underlying hum in all my faith stories and a leading figure in my religion, a shining example of constant faith.

I grew up just two blocks from her house, so she and my grandfather were a constant in my childhood from regular sleepovers, shopping trips and just being together. I learned to crochet from her fingers, I think she taught me the summer I was 16 and helped my grandpa take care of her after she had a fall and broken bones. Working with yarn is fun on its face but it's also always connected me to her.

Gran was not just part of my history but also a part of my weekly routine and life now. I would call her two or three times a week, usually in the afternoons when her helper had gone home but before her supper was delivered. She could chat and listen to whatever was on my mind and heart. I'm already feeling adrift without those calls or the possibility of them. And oh, how she loved Jane. Jane loves her too, and navigating this conversation with her is possibly the hardest part for me.

Gran was a teacher with a 30+ year career. So she touched countless lives through her classroom and interactions with children. Her work in her church, from Sunday school teacher to church board secretary and beyond, was critical to its functioning. And these are only the things I, as a child in her life, know about. I know her life was rich and full of love.

I selfishly would have liked more time. But I know she has moved on, that she was ready to go to the Lord. And I pray that her reward for a life so well lived is more than she ever dreamed of. I miss her so much and am so grateful she loved me.
at December 11, 2014 2 comments: 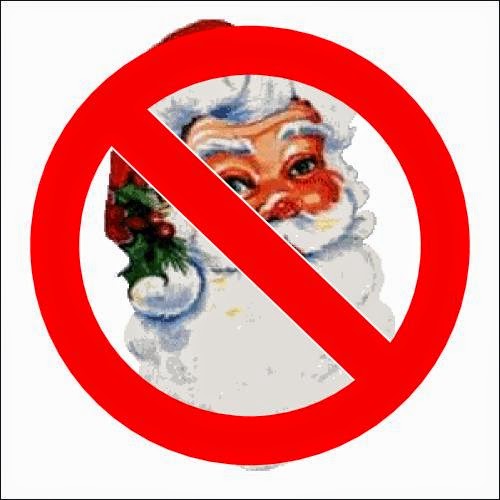 We do read a lot of Christmas books, and Santa is featured in some. I don't want Jane to be ignorant of anything, including the Santa myth. I know it's confusing, but I just keep telling her that Santa is a funny, pretend character. I don't want her to go around and tell other kids "he's not real" (I never say those words). Childhood friends are still a little touchy about me ruining the magic for them in Kindergarten. But I will never pretend he's more than just a fictional character. I just hope we don't piss off anyone!
at December 08, 2014 2 comments:

Today I was at the Sunrise Senior Living Center holiday market. If you stopped by my booth and are checking out my website, welcome!

Thursday, December 4, is the Jingle Mingle at Jane's preschool. So I'm going to have a crochet hat booth. I'm excited and nervous. I have 47 hats ready.

I also have another sale for Saturday at a retirement community, so I've also made four thread starched ornaments. I'd like to make more, but we'll see about time and how long it takes these first four to dry. I don't expect every hat to sell tomorrow, but I might be running low for Saturday and need to spend all day Friday crocheting. Good thing I like crochet.

If you're visiting my site after seeing my work at the Jingle Mingle, welcome! If you'd like to order a custom hat, see my Want to Order a Crochet Hat? post for details on what measurements I need. I can probably still make a few hats before Christmas, so contact me if you have that deadline.
at December 03, 2014 No comments: