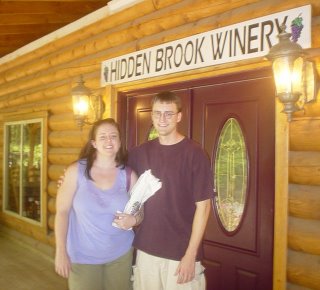 Good times with Gunther and his girlfriend Jennie. The four of us went wine tasting in Loudon County... Good times and good wine. Things got a little cranky at the end because of a lack of food throughout the day. It was my first time to go to a tasting. You can see we bought a bottle at this winery. Woo! Now Shawn and I will have to find reasons to drink it! We are so non-lushes...

In other news, I finally had people over for "housewarming" -- and it was fun. Very small crowd, but it was somewhat short notice and I wasn't expecting much. I made crab dip, which went over really well, and Brooke made peach pie.

I am contemplating buying my name as a URL... I am so dumb but I would like to have that. It would be less than $20 a year, so maybe it's worth it... We'll see. It is still available though...

I am going to get back to it -- some laundry, dishes, etc. I need to prep for the workweek, etc. It's only FIVE more sleeps til I squeeze a Bubba Max! YIPPIE!!!!!!

HOW does one figure out what type of car insurance one needs? And how might she get all that finished up? Well when she is me, it is a rough question and tough stuff. I am slowly muddling my way thru, and hope to have insurance within the next few days (perhaps tomorrow) that is different from what i have been on (my parents' policy)... being an adult blows.

but i love my job!

No FUN being an adult

I'm sure it's less fun than being a baby, although Owen might disagree.

At issue 1) a dispute with comcast over some creditors they have sent after me regarding arbitrary numbers for which I never received actual comcast bills. I *think* I have it taken care of, and two customer service reps (one from PG and one from Alexandria because I've had service in both areas) called me within a day or two of me e-mailing the complaint letters (and I sent those letters snail mail to the actual creditors on monday). It's possible this is because I sent the letters not only to the comcast e-mail for customer service but ALSO to the PR office, mentioning the fact that I am a trained journalist (not exactly a lie, right?)... Hrm.

2) Apparently I was supposed to get my car licensed, insured, etc. in VA w/in 30 days of moving here, SO I'm giving myself 30 days from today because I just realized this and I can't rewind time. It is going to be a pain in the ass but at least I have Friday afternoons off in August to spend at the DMV, etc. I've been searching the internet for insurance quotes, and they range so much it's hard to know what's what. I don't understand liability, etc. I can't believe I have a master's degree and I'm so INEPT at just functioning in an adult world. GAH!

Today at work was good. I went to a PRSA blogging event and found out about ways to get media exposure in blogs and some ideas for starting a blog at the actual company. We'll see though. Some people seem very against the idea of a blog, and we do have more work than we can possibly do with the staff we have now so we'll see.

I'm really tired and have no new pictures to post. I promised an update about the Danville adventure and hopefully it's coming, probably intermingled with my first visit to the VA DMV. And I keep calling it a state even though it's a commonwealth. I don't live in a county either. It's the city of Alexandria, and it's just not in a county. so weird. 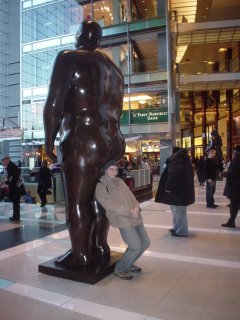 I found this picture as I was browsing my Picasa files and nearly died laughing. It's from our New York trip in March. Sorry for all the picture entries -- they're the kind I love best though! ~Mari... 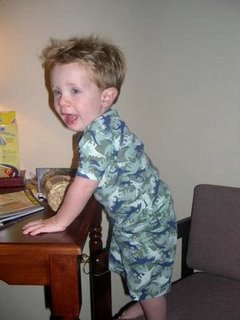 THIS is what love looks like. He's a precious little moo hoo and I can't imagine anyone more loveable. I think I am too doting but I cannot help it. I love this child and everything about him. So there it is.

Email ThisBlogThis!Share to TwitterShare to FacebookShare to Pinterest
Labels: owen

This is delayed, and I need to write a complete update about it, but here is a brief view in pictures:

The first is a cowgirl I made with the confetti on the table at the anniversary/birthday party, which was a BLAST (as you can see by subsequent pictures).

The picture of Shawn and Dale (his mom) is from earlier in the day when we were sitting in her carport (she and Steve have cats, to which I'm quite allergic, and luckily in the shade with a fan we were OK to sit outside and visit!).

The next is of me and Shawn. Weird that my (blue) eyes were "red" but in the pic with Shawn and his mom and the same pic with Shawn -- their (brown) eyes were NOT "red." Curious. Although I'm sure the daylight had something to do with the Shawn/Dale normal eyes... Or maybe I'm just EVIL!

After that is a pic of Shawn and a couple of his buddies from high school days: Aaron and Josh. Kyle had already left, but there was quite the D&D contingent at this party... Ah, memories. :) 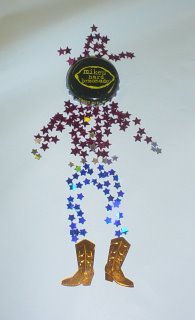 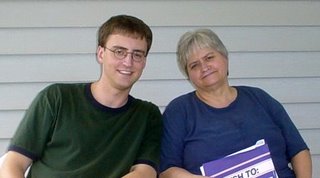 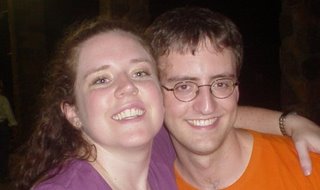 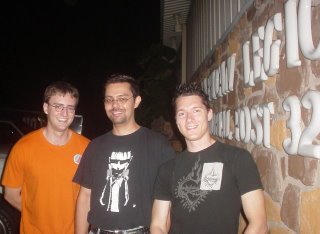 Here is my dad with Grandpa's llama, Jack. He and Shawn have a running joke that he (Daddy) will ride Jack to UMD for Shawn's graduation... Hope that isn't a requirement for Shawn to graduate, otherwise he really WILL be a professional student even more than he is! 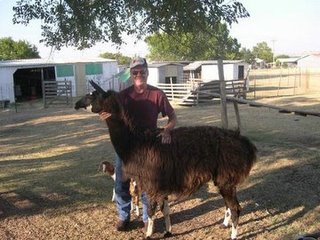 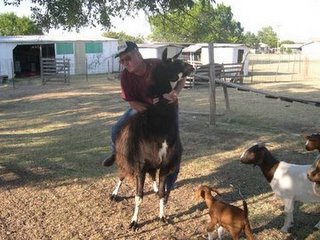 Perfect 10s and the Odds of a Pink Nursery

Perfect 10s and the Odds of a Pink Nursery