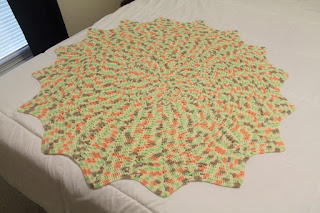 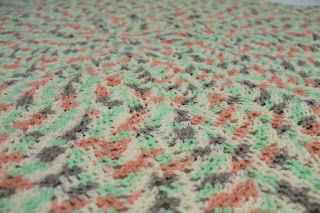 I crocheted this blanket -- called Sunshine from the book Little Crochet Modern Baby Designs -- for my college friend who had her first baby in August.

I had started this more than a year ago, and the pattern proved too hard. It's got some pineapple stitches, and the stitch markers required  to get things right muddled my brain. I'd set it aside for a number of months. But when I found out this friend was pregnant I picked it up again and had a much easier time. My hook was flying!

My friend didn't share the gender of her baby before the birth, so I was hoping this yarn I'd chosen would be gender neutral. Of course as it worked up the orangish color in the variegated yarn started looking VERY pink and I knew this was a "girl" blanket.

After I finished this I started on an alternate "boy" blanket -- a cool technique with the corner-to-corner stitch but changing colors to make a picture appear -- but I never got into it enough to get it done before her baby (A DAUGHTER!) was born.

Basically I think this blanket belonged to this baby girl all along, since I had so much trouble doing it before she existed and then it came so easily once I was making it for her.

Now I have a work-in-progress of the owl blanket, and it's not as easy as I thought it would be because of how many color changes there are -- my yarn is getting tangled, I have knots in the yarn from just annoying yarn and I gave up at least for now

I am still fighting a ductal yeast infection in my breast -- candida during breastfeeding or however you say it. It's the pits. I've spent significant time and some good chunks of change on my efforts to kill the yeast. I am cautiously optimistic that this infection is nearly gone. Knock on wood and cross all your fingers! Here's a rough estimate of what I've done since early July to get here:

So adding all that up we're at $224 actually spent (not including the $95 the lactation consultation would have cost). I'd gladly throw money at this problem just to get better and it was the TIME more than anything that has been hard to deal with. I've been robbed of pleasure with my baby, and while we're still nursing and everything is great with her growth and health I am battered and beaten down from this experience. I hope I can bounce back and continue to get better until completely, truly healed. And I hope you never experience this. If you do/found this via Google please feel free to email me for empathy!

Last week I finally listened to the This American Life episode "Tell Me I'm Fat." It was put together around the release of Lindy West's book "Shrill: Notes from a Loud Woman," which I pre-ordered and read when it was published earlier this year. I've loved West's writing since Jezebel, and I really liked the book. I loaned it to my sister before I could go back and make notes for this post, but I checked it out from the library electronically and copied out some of what I wanted to remember/share.

I am fat, but like Roxane Gay says in the TAL episode I'm "Lane Bryant fat," meaning I can still move about in the world and there are places I can buy clothes. In Shrill West talks about that too --


"I’ve always been fat, but I was the fat person that still mostly fit. While I couldn’t fit into regular-lady clothes (more bejeweled tunics covered with skulls, cherries, and antique postage stamps, please!), and I had to be careful with butt safety (I once Godzilla’d an entire lunch setting while trying to sidle through a Parisian cafe), I was still the kind of fat person who could move through the straight-sized world without causing too many ripples. Until I couldn’t."

I'm the kind of fat person who can move through the straight-sized world without causing too many ripples. I want to be OK with my body as it is without giving that body license to break down (or something). I want to remember this, also from Shrill:

And I want my girls to know that too. My value, their value is so much more than our bodies. Women don't have to be a certain size to be worthy of love and respect. Another of the acts in the TAL episode was about a woman who lost a significant amount of weight and got everything she ever wanted (relationship, acting jobs, etc.) once she was thin. I feel like I have everything I ever wanted, although perhaps I'm missing something???

My daughters are also an impetus for wanting to be less fat -- mainly to be able to move through the world more easily (socially as well as just literally moving more easily). And ideally to stay in this world longer. (I say that not that fat equals unhealthy, but I am a heavier weight when I'm not taking care of myself -- less exercise, more sugar, etc.)

Lots to think about and remember for discussions down the line.

No more affiliate links via Amazon, since Louisiana changed its law to require taxes be paid up front Amazon just shut down the affiliates program for anyone living in the state. So there's that...
at September 07, 2016 2 comments:

Nothing happened to me because of the Louisiana flood. But it could have. There's nothing about my character or where I chose to live that exempted me from the flood waters. It just happened that the mega rain did not fall over my house. But others in our community were not so lucky, if luck is even the right word.

Together Baton Rouge is an organization that was started several years ago to address issues of social justice and bringing the community together in rational ways to solve problems. Boy have they stepped up and been incredible in their efforts for this flood recovery. I'm proud to support them financially, and I hope you'll consider a donation too.

As a Methodist I'm proud that no matter where the disaster we are always on the ground. UMCOR is another great option for your donation dollars, and for the Louisiana flood going through the Louisiana Annual Conference is a good idea too. Our church did a lot of work in the initial week after the flood, and we continue to house "second responders," or those teams of volunteers who have expertise in gutting houses and came out to do just that.

I still feel out of sorts -- I should be DOING something -- I am experiencing no negative outcomes to this flood that hits SO CLOSE to home. My life is uninterrupted, while those so nearby are still shattered. (Although I still have the "excuse" of nursing mother to keep me out of heavy work ... although if I look at myself I'm so weak I doubt I could do the physical labor required even without the need to remain with my baby almost all the time...)

The national media coverage -- rather the lack thereof -- is problematic for getting recovery dollars and private donations flowing into the community. It's also understandable if infuriating. There's no one to "blame" in the flood scenario is something I've read often, and really that means there is no villain other than mother nature. And we can pound our heads against the wall all we want there's no changing that.

But I also don't think the national media scoffs at stories of the Cajun Navy or people saving each other. It's just less compelling perhaps the farther you are from the tragedy. That's true as human nature I guess or at least the way our media system is set up now. I didn't give a lot of thought to Superstorm Sandy even though we'd recently moved from the area hit when it happened in 2012 and even though it got A LOT more national coverage.

A lot of donations have come directly to families via GoFundMe accounts that have been set up. I've donated to one for my friend. But the awful part of that is GoFundMe takes 8% off the top. I knew it was a bad idea and I should have bought a gift card or just sent her a check directly. Blurgh.


The other instinct that has kicked in during this time "after" is the desire to clean out all my crap. For several days I looked around and thought about the things on the floor/low shelves would just be gone should water come in. And how that would probably be OK for most of the stuff. And should I take steps to eliminate excess material goods? (Yes, a thousand times, yes.)

I've also been cutting way back on spending on non-consumables. We're still doing grocery shopping and getting medicines (wait for the post on how much fighting the breast infection is costing me to see that math...), but I haven't been shopping for new clothes or shoes or anything, even as back-to-school sales are in full swing. (I did buckle today at Target during the back-to-school clearance items, so I'm sure it won't be long before I'm back to my regular type of spending habit.) We have plenty and there's no need. We should put that money toward helping others rebuild their lives. What else is there to do?

These are the main thoughts that have been on repeat in the last few weeks. In addition to the deep sense of gratitude for remaining high and dry.
at September 02, 2016 No comments: