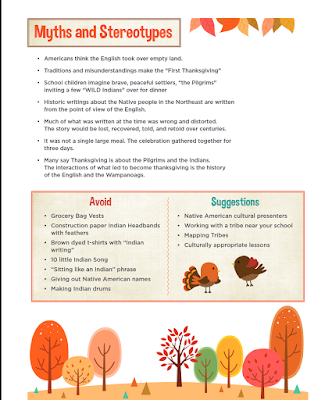 While reading for magazine ideas I came across a great curriculum put together by Oklahoma City Public Schools about culturally appropriate ways to teach young students about Thanksgiving. It lists myths and things to avoid and has suggestions of alternatives plus plenty of craft ideas and book recommendations.

Liv's preschool has an annual Thanksgiving program of some sort, and they dress up the three-year-olds as Indians. I am NOT about that, so once they tell us the details (it's next Tuesday!) I'll make a decision about whether Liv can participate at all. I'm not sure a boycott will do anything but soothe my conscious, but that might be enough. It certainly will mean disappointing Liv, since they've been working on all kinds of things for the program. So far I've only heard about hand-print turkeys and painting feathers, but I definitely don't want my kid to sport a feathered headdress or anything else that basically makes fun of another culture even if it's not meant to do that (and clearly that's not the intent of the preschool). We would never dress up our kids in black-face, and this is a similarly offensive thing.

I sent the link to the curriculum to our preschool director, but I haven't heard back. (I kind of expected a generic "thanks, I can take this into consideration for next year's program" or something similar -- not just ignoring me. I didn't say Liv couldn't participate in my email either. I don't actually have any concrete information about what it is other than seeing another parents' celebratory photos from last year.)

I don't want to be the problem parent, but in many ways I am. I am the "too liberal for Louisiana" person pushing back against commonly held ideas that are wrong. Even some of my like-minded friends think this is going too far somehow, or trying to assure me that because Liv is young it won't damage her. But white supremacy and devaluing other cultures begins young and is so baked into everything everywhere. I definitely do not spot it everywhere, but when it's so egregious I have to say something.
at November 11, 2019