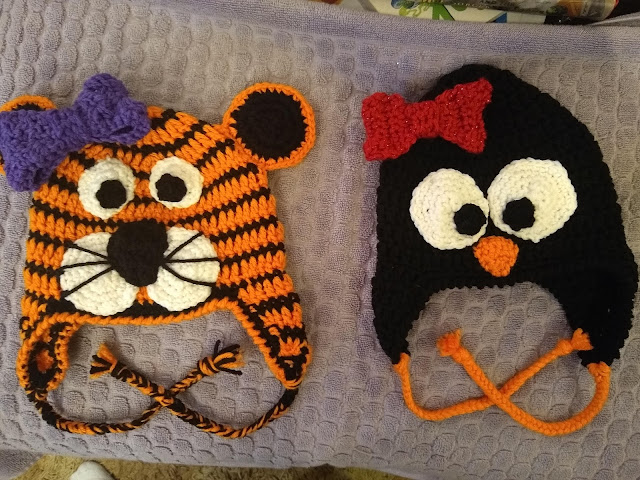 A friend from church commissioned two hats for her one-year-old great niece. I added bows, although they are removable on hairclips. Thinking now I should have just sewn them on since it's basically a baby going to wear them, but a baby who can unclip things for sure! Oh well. She seemed happy with them, and hopefully I'll get to see a photo of them in action later on. She originally asked for "whatever Christmas-y hat you have left over that would fit a one-year-old," but didn't like what was left (I even had an adorable gingerbread girl!). I was happy to make these, even though they're not really Christmas-y (I added the red sparkle bow to the penguin to try to make it so!).

My friend said she could be my agent and get lots of people to buy tiger hats, but they're very fussy to make -- the stripes aren't terribly hard, but figuring out the sizing with two different stitch heights (black is single, orange is double), plus the ear flaps and braids, 10 circles (two striped for ears, two black for inside ears, two whites of eyes, two pupils, two white cheeks) and a triangle (nose), sewing everything in place and adding whiskers. It's a lot of work. On the other hand the penguins are much simpler and with varied eye placement they can have different expressions.

I need to buy some alligator clips for the bows -- I just used regular barrette type clips that I use in the girls' hair, particularly Jane's to clip down her self-cut micro-bangs when she'll let me (which isn't often). Before they'd been clipping down the other hair she'd chopped short, which finally grew out just before she did the micro-bangs. Ugh. A digression.

I heard back from the preschool director and we had a conversation that made me feel less bad I guess. Certainly not ignored. The kids do have "Indian" names -- Livia's is Smiling Kitten -- which is egregious and upsetting. The director said she'd understand if we didn't want to be part of the gathering. So I'm just sitting with it, praying about it and stewing. What good will it do, what good will anything I do do?
at November 12, 2019