Today is Jane's GOLDEN birthday. She turns 8 on the eighth! 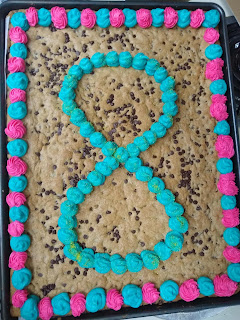 We celebrated by visiting her at school for lunch, going to Knock Knock Children's Museum after school (and showing up at carpool early so she was one of the first kids to leave), supper at Red Robin and plenty of presents.

Tomorrow is her birthday party, and most of the girls in her class are coming plus a few friends from church. I'm hoping it will be a good time, and I can get another "free space" NaBloPoMo post by writing about it tomorrow.

Today I took Liv to swim and early voted in addition to the birthday shenanigans. I also did a phone interview and wrote a quick draft of a story. I baked Jane's birthday cake, which is a cookie cake. I hope it tastes OK. It sure LOOKS great and smells fantastic. I used this sheet pan chocolate chip cookie bars recipe and then added my standard buttercream frosting. I put yellow sprinkles on the 8, and I wish I had used white frosting for the 8 or left the sprinkles off. I let Jane help me decide what to do. I don't know that it's so great. It probably doesn't matter, and it will almost definitely taste great.

Now there's a rocking party going on around the block from us, and they're so loud that the music and their screams are reverberating in the sun room. Presumably  I don't want to call the cops because I don't want anyone killed (fairly certain it's just a bunch of white boys, so no risk to them if cops show up). That's really where I'm at when thinking about police. Not so much community helpers... 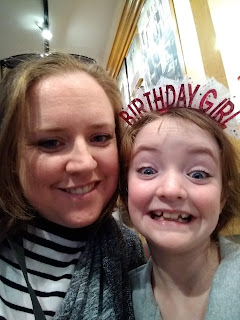 I've been a mama for eight years (maybe more depending on when you think motherhood "starts" -- perhaps the first time I threw up during pregnancy?!). My hair is a lot greyer, I'm a lot more tired -- but both of those could just be aging. I love much more and am much more tenderhearted.

Happy birthday to my very best big girl from her biggest fan!
at November 08, 2019