The first place we went had a bike that I really liked. The medium was a little too small for me, perhaps, so the bike man called to the other locations and found one that had the large so I could go try it out. I did, and Shawn was convinced it was the correct size. The bike lady at the second shop said it looked almost too big, but that if it felt OK it was good. And it did feel OK.

At Target we got a lock and a helmet -- silver for silvermari. It was less than 1/3 of the price of those they had at the bike shop. BUT the bells at the bike shop and the baskets were cheaper. I'll bling out later, either when I'm back from my travels/before Christmas or in the spring if the weather here actually turns cold enough that you can't ride bikes.

It is threatening rain so not sure if we'll go test out the new wheels, but I've got a ticket to ride!!! And I can get to work even more easily now with this new option. Huzzah!

I haven't taken pictures, but it looks something like this, although it is not the exact model. 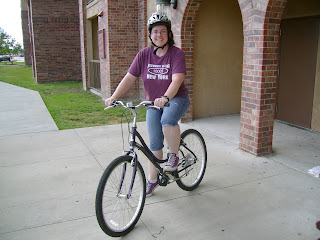 Also, I have a spare purple bell you may be interested in. :)

You go girl! Take that bike for a spin and show the neighbourhood how it's done. Glad to know you're taking safty into consideration with a helmet, look on the bright side, you can always blame a bad hair day on the helmet!