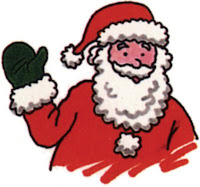 In my blog reading throughout the days I come across a lot of great stuff that mostly just makes me happy/adds to my own personal edification and knowledge banks... This, however, spurs something inside me ... my mom never told me the Santa lie, or any other lie for that matter.

So, no, kids. Mari never believed in Santa Claus. And, as my former classmates can attest, I made sure no one else in my Kindergarten class believed in him either! While that was just a facet of my bratty/know-it-all attitude (have I lost any of that fervor? probably not), I am grateful that my mom didn't fleece me. Most of her reasoning was about the true meaning of Christmas and not clouding the Christmas story of the Holy Family.

But she was an older sister - her sisters were born several years after her - so her parents' lie about Santa lasted longer than necessary and continued even when she started questioning the story. So when she found out that no, there isn't a Santa Claus, she freaked out a little and started questioning what else the grown-ups were lying about.

In FACT, I'm fairly certain there's a South Park episode about this type of freak out. I can't easily find it on YouTube and don't really want to watch random clips of SP - but if someone finds it I'll post it. It would be a perfect illustration of this.

So, I don't intend to tell my kids (oh, how I pray we'll be blessed with children someday! feel free to pray for that too!) about Santa beyond a straight up truth - that this is what people believe/it's a nice story. BUT I will also be cautioning my kids NOT to spill the beans to their classmates and to respect others' wishes to believe in Santa Claus...

This is ridiculous and Christmas-in-July. But there you go.