So I'm convinced that New York City is out to get me... Well not really, but come ON. How much more can I take?

Shawn and I received a night at the Waldorf-Astoria from my coworkers as a wedding gift. Took us almost six months to redeem it, but finally this weekend was right - it gave us a posh bed to sleep in (instead of the air mattress) and refuge from any chance of being bitten by bugs. Plus it was a mini-honeymoon on November 15, which was one of the wedding dates I considered, since it was my grandparents' anniversary ... and I L-O-V-E November!

Check-in was at 3 pm, but we arrived at about 2:15, just in case they could get us in early. Plus there's people watching and things to do in the lobby to pass the time. Little did we know the excitement in store for us.

We're lounging and waiting - the front desk said they would call Shawn's cell phone when our room was ready. Then suddenly we hear pops - GUNFIRE - and people start running and screaming "robbery" and "get out" and "RUN!" And so we ran - ran out the Park Avenue exit, luckily carrying all our things. 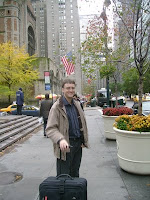 Within minutes the hotel is surrounded by police cars and fire trucks. We booked it - like ran a few blocks away, Shawn dragging our suitcase all the while. We found a Starbucks to get wifi (I twittered it, in my shock misspelling Waldorf as Waldorph ... but I digress) - and found no news about it. I called the NY1 tip line and told them what I knew - they told me that a cop had been shot but they were still working the scene. Ah, the journalist juice was flowing in me a bit - as I half wanted to go back and see what was what and get the scoop!

After an hour and a half we decided to go back - figuring that with all the cops there it was probably the safest place in Manhattan. We'd called the front desk a few times and gotten no clear answer about when our room might be ready or if we could even check in.

When we got there the jewelry store where the robbery happened was blocked off, so we had to walk through some back hallways. The little bell hop guys were chattering away and acting like nothing was wrong while the place SWARMED with cops in "NYPD" jacket. Like a scene out of Law & Order for reals!

We waited in line - AGAIN - and got our keys - getting up to our room around 4:30 and getting a later check out to compensate (although I felt like they should have offered something more for the inconvenience of sending us running screaming into the streets, although I concede it wasn't their fault or under their control)... The room itself was fine, and fancy-schmancy. No view, which was sad, but a really comfy bed with lush sheets, pillows and comforter. The shower was leaky and the toilet seat broken ... but I figure that's just part of NYC hates Mari (perhaps the REAL name of this blog?!).

Here are some articles about the shooting/robbery:
The gist is this (via AP):

Gunfire erupted in the lobby of Manhattan's storied Waldorf Astoria Hotel during an apparent robbery Saturday, wounding at least one person and resulting in one arrest, authorities said.

The shooting started inside a jewelry store in the hotel Saturday afternoon.

So, what with the bedbugs and crime ... what is this all trying to tell me? Maybe it's just giving me good fodder for my NaBloPoMo challenge? I swear though ... I'm ready for some suburban life - or at the very least to have a comfortable place to sleep each night where I won't be eaten alive/have my blood sucked by vermin... A girl can dream I guess.

A happy Mari image from our room: 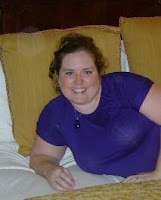