One of the shows I watch is Modern Family. It's a sitcom done in the faux documentary style that seemed to start with The Office.

Anyway, last night's episode (which I watched about a half hour after it aired and was tempted to blog about right away), included Gloria, the sexy second wife of the grandfather, nursing her new baby while she signed for a package. They digitally pixilated her boob, and the dialogue made clear that the baby was nursing/not like it was popped off and it was just a boob that she was showing. There were jokes about her breasts, that she is too free with her body, etc.

Most of the time they were making those jokes she was clothed -- with the low cut tops she wears in which you could see even more of her breast than what was pixilated around the baby's head. I really don't understand why the breast when used for its intended function (even fictionally) is something that requires digital alteration lest we be scandalized. But when it's on display for sexual purposes we have no problem with it.

Furthermore, I don't know why depictions of breastfeeding have to be like that -- somehow shameful or sexual. And I guess it stuck in my craw even more because this particular show uses boob humor on a regular basis.

I know my thoughts aren't fully formulated or useful, but I had to put it out there since it struck me as just wrong and distasteful.
at February 28, 2013 1 comment: 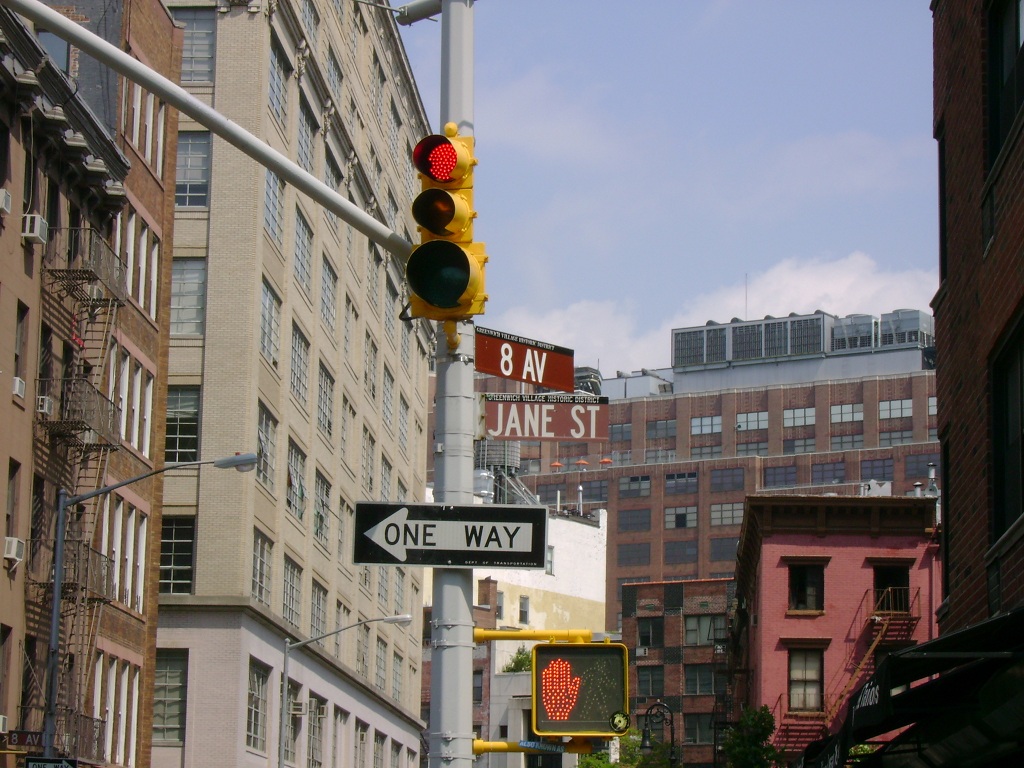 In the waning days of our time in NYC I took pictures of things I wanted to remember. I was looking through them today. I had such a dumb camera then that most are blurry or weird. But the series of photos I took of the Jane Street mean I wanted a baby named Jane for a long time.
at February 25, 2013 No comments: 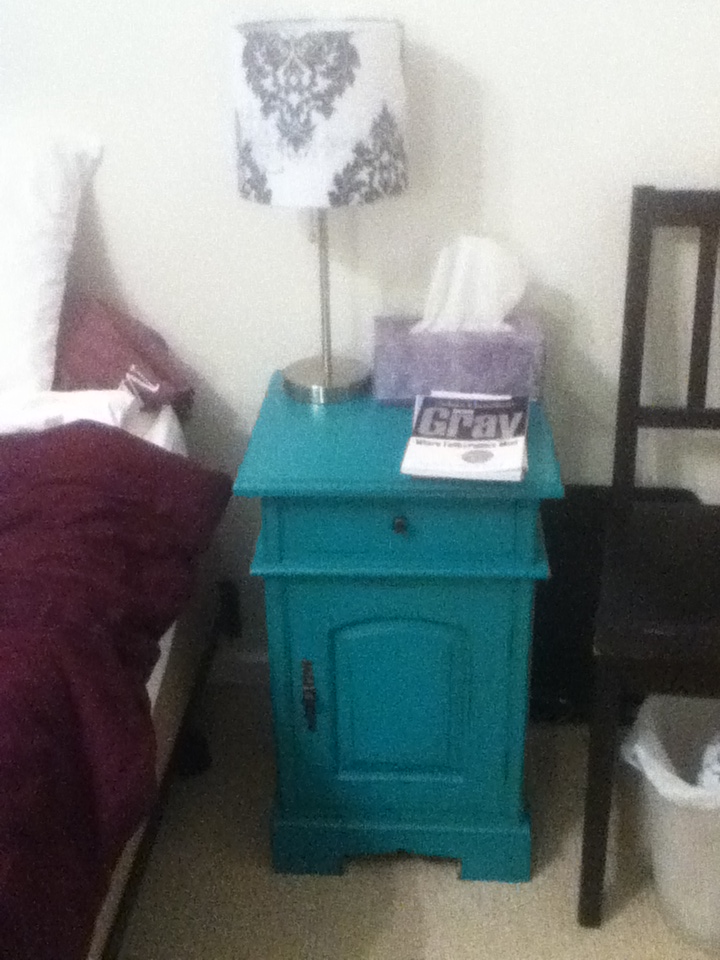 When we were in New Orleans this weekend Jane and I checked out a furniture store on Magazine Street. I scoped out this little nightstand on Friday when we were on foot, fretted about it and went back on Saturday to buy it when I had the car. It's super turquoise and super functional.

I had been using that chair as a nightstand ever since we moved into the house. (The chair was theoretically an upgrade from the rubbermaid-type drawers I had been using for ages before that.)

I had been waiting until we got a full bedroom suite, but realizing that isn't a priority but that I still wanted more function beside the bed I started the hunt. I'm really happy with this and if we ever do get a matching set of bedroom furniture this can always go in Jane's room. Although I can't imagine I'll ever want to give it up!

We're also in the market for a china cabinet -- and there was definitely a contender at this store. We're looking for small-ish footprint, dark wood, blocky/clean lines with drawers, lower cabinets and glass-front upper cabinets for display and glass storage. We might like to have a buffet surface too (the contender here didn't offer that). I keep checking Craigslist and maybe need to look at thrift stores and estate sales. I'm super cheap, which is why I didn't just buy the one at this store. It would be great to have something though so my fancy wedding china wouldn't still be sitting in a box in our utility room. Oh me.
at February 18, 2013 1 comment: 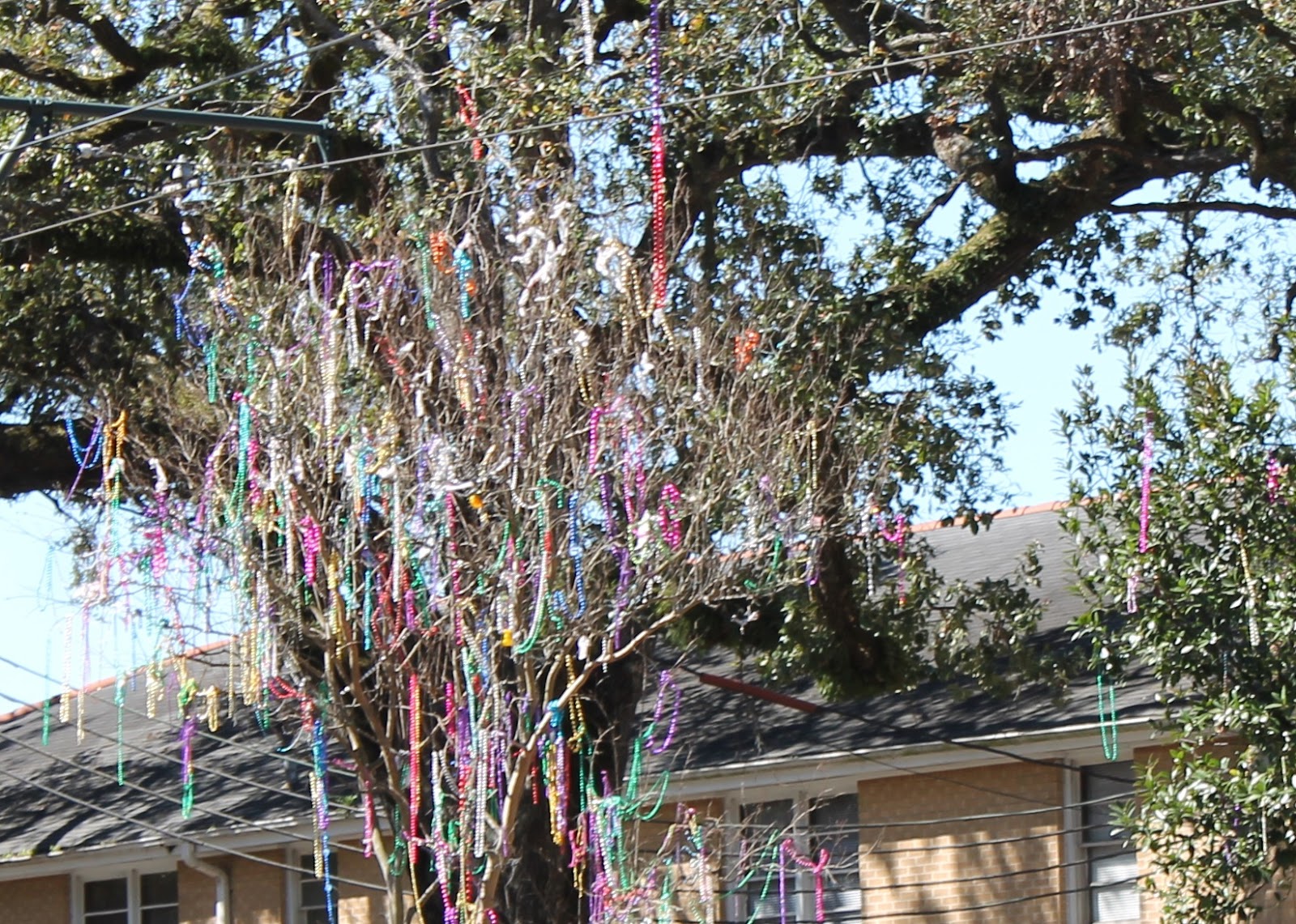 Took this from the car yesterday in New Orleans -- what a mess, although beautiful in a way.

On the streetcar someone asked me where the beads come from -- like who pays for them. I have no idea, but I'm glad I can pass for someone from Louisiana ... I think?

Then I heard a story on NPR about a company trying to make "throws" locally. They're more expensive but would be less petroleum-based and less disposable/of nicer quality. Weird, weird.

Edit to clarify: we were not in New Orleans for Mardi Gras itself. Rather we were in town the weekend after, before the beads have fallen from the trees. I'm not sure if they ever clean them up entirely.
at February 17, 2013 1 comment: 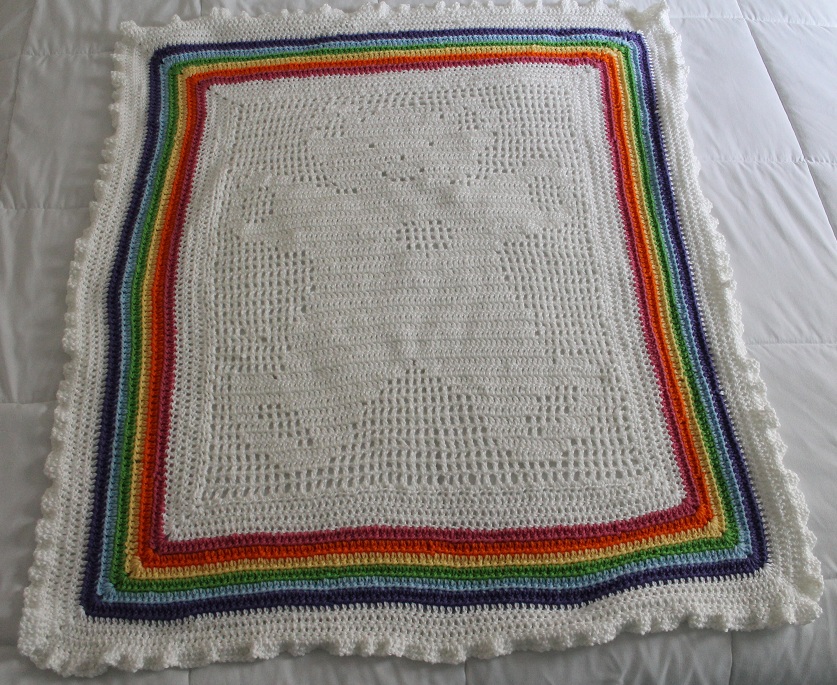 I made this blanket for Jane. I didn't make her one before she was born since I was sick and/or lazy. Her favorite word to say right now is "BEAR" so I thought this was a perfect choice.

I had yarn leftover from making another rainbow themed blanket (which I'll post about once I actually give the blanket to its intended baby!) -- instead of orange it was supposed to be peach, but I could never find that in worsted weight. This made the rainbow less baby-ish than the pattern picture. But I think I like it better this way.

The white yarn was on super sale at JoAnn's -- 50% off for Red Heart Super Soft because it was somehow Christmas themed? It’s pure white though, and oh-so-soft.

The filet pattern is great, and I love the look of adding stripes to fill out the blanket. The ruffle edging was a treat too.

Very happy with how this blankie turned out. Jane loves it too!

Our household was chosen to fill out a TV diary for the Nielsen company to determine ratings. I'm sure everyone gets to do it once in a while.

Jane never watches TV, and Shawn rarely does, so it was mostly my TV watching ... and it pretty much mirrored my November 2012 project to write a post about every show I watch. Lovely.

I just wish Psych were on -- for reasons other than being recorded in the dumb TV diary.

I got $30 cash in return for completing the diary which is nice. But I was more than a little annoyed when they called the house TWICE during the week of the survey at almost 9 p.m. Fortunately Jane slept through both jangling rings, but I was pretty aggravated.

I made some pesto sauce this week, using some pine nuts I inherited when a friend moved away. All was going fine as I put the nuts and basil into the food processor. Then I realized that the basil was covered in dirt. Whoops!

So I started trying to pull out the leaves. Uh... bad move.

SLICED my middle finger on my right hand. Just a cut, but deep and painful on the tip of the finger. Ugh.

It got blood all over the pine nuts in the food processor. SO I had to dump out everything, wash the basil and start again (there were plenty of nuts left for that at least).

The pesto turned out OK, although I probably needed more basil. We ate it with bowtie pasta and an Italian herb and cheese chicken breast (I had a coupon for some new Kraft seasoning shake-and-bake type thing ... meh).

My finger is still healing. It reopened itself when I was washing Jane's hands, and I've been trying to keep it covered with a band aid BUT it's pretty tough given the location of the cut and the shape of a finger, you know?