There are lots of ways of being miserable, but there's only one way of being comfortable, and that is to stop running round after happiness. If you make up your mind not to be happy there's no reason why you shouldn't have a fairly good time.
- Edith Wharton
at October 29, 2007 No comments: 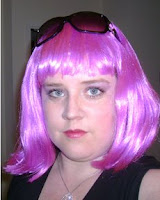 Shawn and I met at a Halloween party. I went to a work-related one tonight. I didn't know what to dress up as, so I perused the costume store. When I saw this purple wig, I knew I had to have it! So I didn't really have a costume, other than I was wearing a wig, fishnets and black. :) I guess I was a "starlet" or something. Or maybe I was just "incognito." I have another party to attend next week - we're supposed to go as our "alter ego" - so I think this will suffice for that too. We'll see if I have a brilliant idea between now and then.
~Mari.
at October 27, 2007 1 comment:

Inspiration
This was* black and white damask. I like the graphic quality, the contrast of the black against white, and splashes of purple will really POP against it. I'm thinking a "seasonless" wedding - not something super spring like or floral. i may even pick a different black and white pattern, depending on what i can find and like...
onward.
~mari.
*image removed at some point, and post updated March 2010
at October 21, 2007 No comments:

The city so nice they named it twice?

This was the start of a post I never published or finished. So I'll give it a brief go now. I need to get back to work!!!

I am preparing to pack up and ship out sometime in the next couple weeks. Should be interesting. I'm selling off much of my stuff. So anyone who needs a loveseat and comfy chair should e-mail me immediately! :)

The wedding's off -- see you in court! | Oddly Enough | Reuters

$48,800 diamond engagement ring. ... Both were 21 years old when they became engaged in December last year, but by September this year the wedding was off. 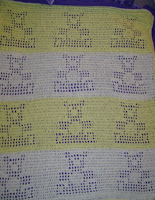 12 teddy bears. I didn't get a straight on image, but it ended up being really cute, and not too hard.

I'm just trying to sell my stuff, but the THREE people who agreed to come buy stuff today are no-shows. I'm tired of waiting around and could be out running errands, or just more able to relax/take a nap/etc. I guess now I've just got to give it up.

I am having FUN on the internet looking at wedding stuff. I am SO going to be able to do this... I've also registered for a bunch of the bride sites...

Ah, someone is coming to pick up the silver lamp. And maybe I can sell him some of the other stuff people haven't picked up yet!!! I need to repost some stuff. LAME!

SO, here's how it went down. (Not a surprise to me either, but I'm OK with that - imagine how close I was to telling more people than I actually did!) We went to Coney Island during the day, just as something to do. It was beautiful and we had authentic Nathan's hot dogs, went on the Wonder Wheel and sat on a bench talking/looking at the water. Then we came back to his apartment, got dressed up and went to dinner - a sushi place nearby. We were stared at VERY hatefully by a "true New York" couple - accents and all. Our chopsticks skills leave something to be desired, but we were pretty happy and ignored them for the most part. Something to get used to I guess - some people are excruciatingly rude here, but I digress.

We had tickets for the observation deck at the Top of the Rock, and we were able to go get in line at about 8 p.m. It took about 20 minutes to actually get to the top because there are only two elevators for that. But once up there (69th and 70th floors), it took our breaths away. You can walk all the way around for 360-degree views of the city. Literally city as far as your eye can see, and you know there's more beyond that. Crazy that we were so high up and still couldn't see many stars (although we did see four planes in the sky AT ONCE...) There were kids on a field trip and other tourists. The kids were throwing pennies off the top - they kept telling their teacher it would be OK because hadn't he seen Mythbusters about it? Ah, kids.

So, the actual proposal was pretty awesome. He read me a little poem he'd written, and he did get down on one knee. I plucked the ring out of its box and put it on my finger quickly before he changed his mind! But then I actually let him slip it on my finger once he stood up. :) It wasn't exactly movie-worthy, but it was special for us... There was no cell phone reception, so calls home had to wait until we got back to the apartment. I was wearing spike heels (so dumb, when will I learn?) so my feet were killing me from all the walking - and we just stayed up at the top for an hour or so. Just looking at this place we're going to call home...at least for now. But then we came back here to his apartment (with me hobbling the last bit of way -- blister city people), and we made our phone calls to start the word spreading.

What's the ring like? 1.25-carat diamond hearts & arrows/round cut in a replica Tiffany setting in palladium
When's the wedding? sometime in 2008 (either May or November - pending Shawn's teaching schedule, my job situation, etc.)
When will you DECIDE when it will be? After I get moved and settled and figure out where I'll be working - basically before the end of 2007, and hopefully in the next month.
Where will the wedding be? Indiahoma, OK (UMC for ceremony; reception TBD)
Other wedding details? TBD
Where will you live? New York City 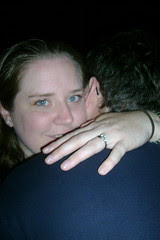