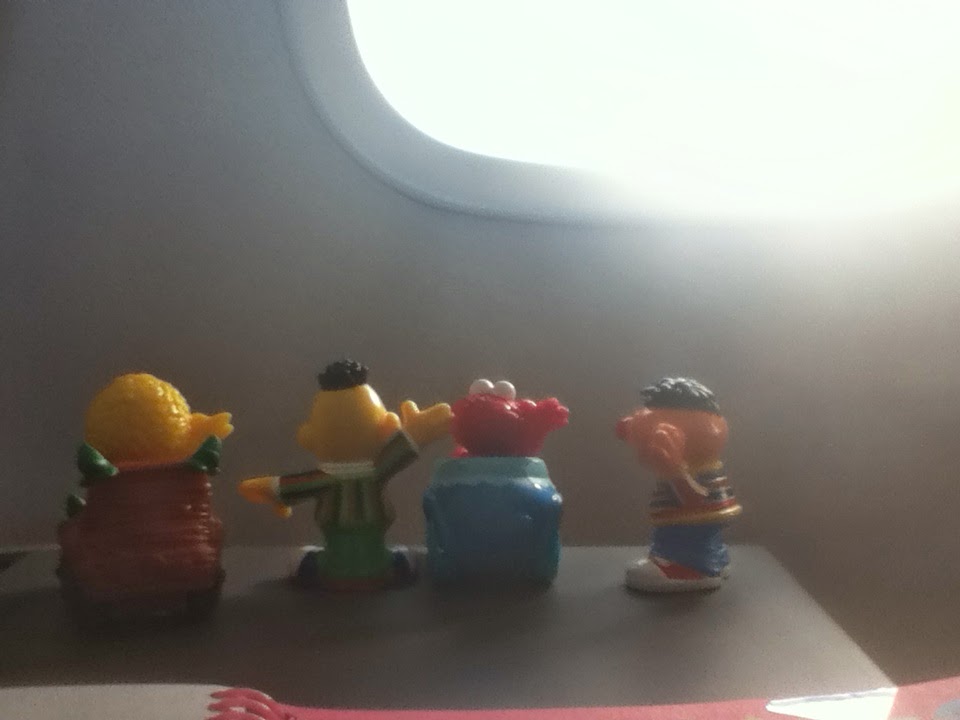 Jane liked to line up her Sesame Street characters so they can look out the window on our flight. They always say "Wowee, Jane!" after they've seen out the window. We only lost one of them, but he resurfaced when we picked up the bags from the floor.
at March 31, 2014 No comments:

A couple weekends ago a stomach bug raged in our house -- at least for Shawn and me. Not eating for just a couple days left me weak and hungry for garbs: simple sugars. Namely CANDY. I gave in (and drank full-sugar Gatorade too!) so that I would have the energy to travel. Now that I'm well and my appetite has returned with a vengeance I am faced with fighting my sugar cravings all over again.

This illness was very reminiscent for me of my morning sickness. That was longer-lasting queasiness and discomfort, and I can't imagine how I survived it. Although every pregnancy is different I do not look forward to that time of sickness should we be blessed with another child. Silver lining is weight loss, although the sugar cravings rectify that in a hurry with my body chemistry!

Traveling while weak was a horrible idea, but unavoidable given the cost of airline tickets and the inflexibility of air travel. I wasn't contagious any more (evidenced by the fact that no one got sick after me, not even Jane), and I was on the mend/starting to feel some better. (Airports while sick also remind me of morning sickness because one of my sickest times of pregnancy was on a work trip to DC -- ugh.)

I knew it would be tough to travel alone with a toddler, but adding in feeling less than 100% and I was in for trouble. The hardest part actually was managing all the stuff. Now that Jane has her own seat she also gets her own carry ons -- meaning Mama was rolling two small suitcases, carrying a backpack and a tote full of her stuff. (Somehow my backpack didn't seem one ounce lighter than when I carried everything we needed in there!)

Miraculously (to me), we made it just fine, and Jane was a trooper, walking along and holding onto her suitcase. I also had her wear her dog backpack while we were in the big airport (DFW). As we went to security she was in the Ergo backpack too -- to give me enough hands to also tote the car seat to the ticket counter (Shawn actually helped me on the way there).

I really love being with Jane, even in stressful public situations. But traveling together as a family will always be my preference, since more hands equals less stress overall. Go team!

I wrote this from Oklahoma. We're home now, and the return trip was about the same. I had too much luggage and not enough hands to keep up with Jane. We waited to go through security until the plane was boarding at our tiny Lawton airport. A TSA agent (I think) helped me with my bags there. Then we got to DFW and our second flight was at the same gate as the first ... actually it was the same plane ... and we had the same seats! Of course we had to get our stuff, pick up our luggage, walk to the end of the jet bridge and then turn around and walk back. We did have time to buy a sandwich, but I was nervous about that and we were almost the last people on ... the same dadgum plane!

Then Jane got her pants caught in the escalator in Baton Rouge. It was a rookie mistake, as we should have taken the elevator instead of trying to juggle a toddler and so much luggage. Luckily just her pants got caught and I was able to rip them. They are destroyed and she has some bruising on her leg (I guess her leg hit the stair or something), but she is fine. I will have nightmares about escalators I'm sure.

Our house is still standing and all is well. I'm just homesick and crabby, although at least I don't have a stomach virus now... The memory lingers though and I'm re-washing the sheets just in case!
at March 29, 2014 No comments: 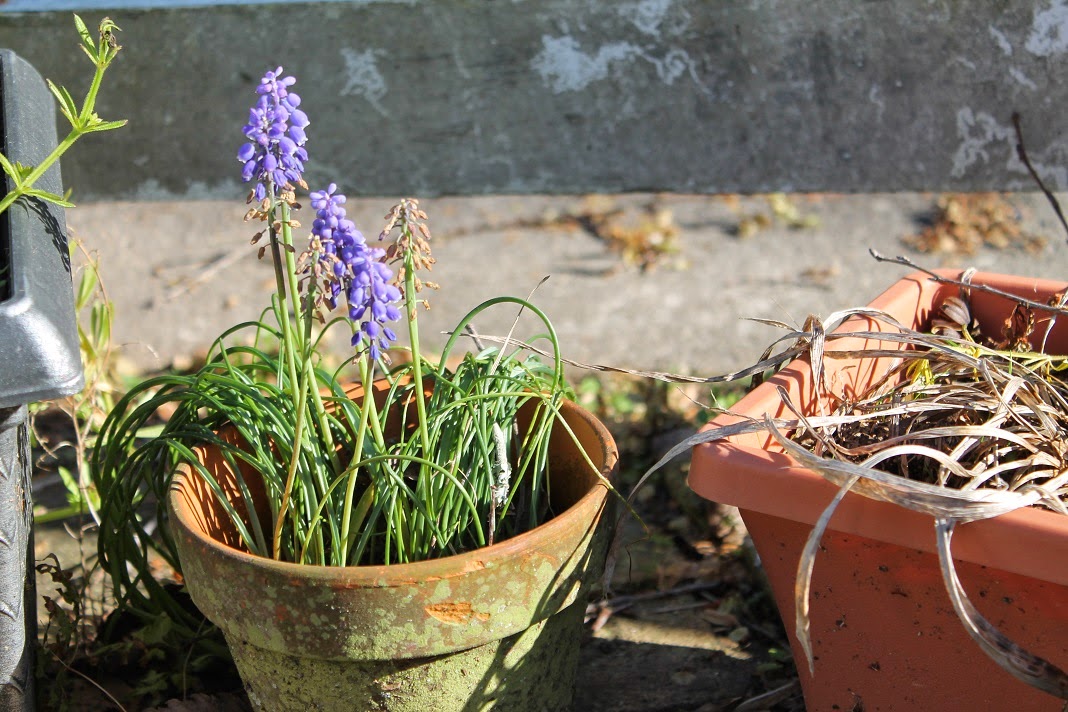 These pretty flowers grew in a random pot in our back yard with other weeds. I don't know what they are called or why they grew, but I like them. 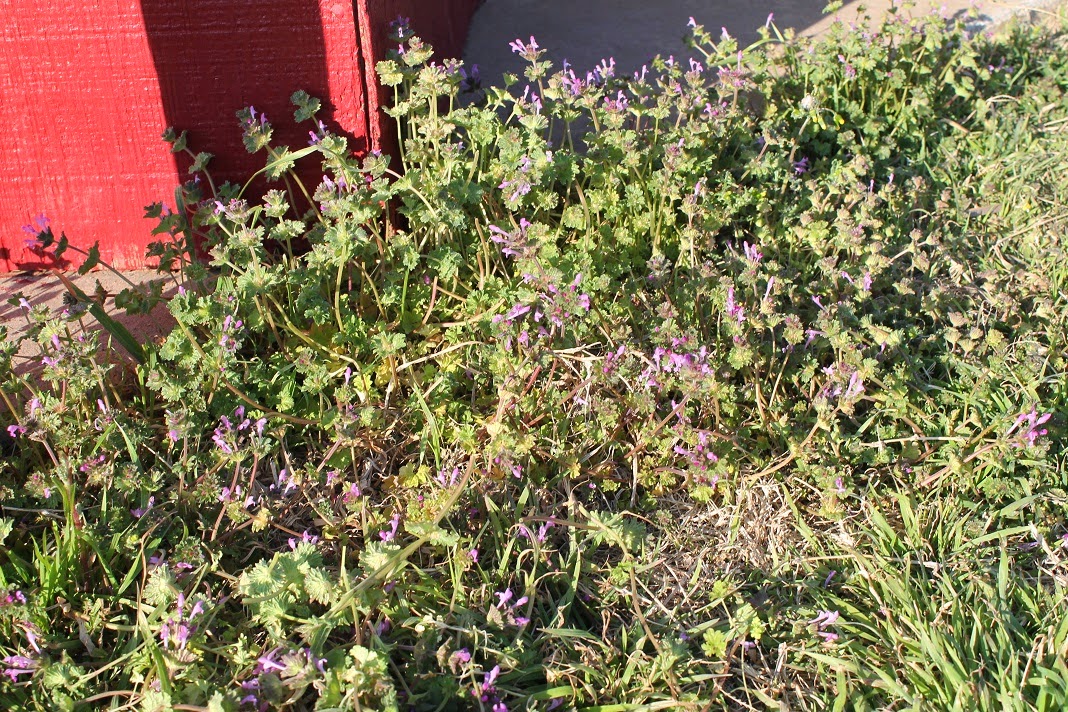 Little purple flowers that are DEFINITELY weeds grow in OK and TX, but I haven't seen them here in Baton Rouge. I remember liking to pick them as a kid and pretend they were wild flowers. (They are not.)
at March 26, 2014 1 comment:

This pattern is so simple -- front post DC and back post DC in alternating groups of four. (I've seen the pattern a lot online, but this one from Delia Creates is the first I saw and the one I used to get started.)

It works up very slowly, and I kept putting the project down. The pattern I read called for a bulkier yarn, which would speed things up. It would also produce an even thicker blanket. With worsted weight yarn (Lion Brand Pound of Love) the finished blanket is already very thick -- floor-mat style I'd say.

I already had the yarn and thought a pound would do, but this really eats yarn. I had to buy another pound, of which I used about half. Both skeins had a few knots in them, which always ticks me off. but otherwise the color is a soft, consistent white, and the finished blanket's feel is soft and cozy, especially after a wash and dry. (I love acrylic's easy care for baby blankets.)

I don't know if I'll make this pattern again -- at least not any time soon. But I do think it would be a great one to do for wash cloths, as the post stitches make an amazing texture and tight weave. (And a smaller version would go much faster/be more satisfying I think.)

(I also finished the blanket with a reverse single crochet border, which is one of my favorite stitches and definitely my favorite border stitch right now.)
at March 24, 2014 No comments:

The number of toys Jane owns is overwhelming to me, and yet I find myself coveting more, and worse buying more. I think the main problem is there's no "out" from our house, because of the idea that she'll play with them someday (and/or someday there will be a sibling to play with them).

Also I love deals -- garage sales, consignment sales. And I also have to fight instincts to reward Jane with toys... I'm not always successful, as we'll sometimes pick up things from the dollar bin just because or as a treat for putting up with so much shopping with Mama, for example, or in preparation for a big trip. And then the treats stick around!

So our house is strewn with toys, and even though we keep them picked up in baskets and the big toys lined up (anything not picked up "goes away" -- i.e., is put into the office, meaning that room has toys in it too). There are toys in the living room and TONS in the sun room. There are toys in almost every closet, and art supplies on top of the TV and in drawers.

Here is the latest acquisition: