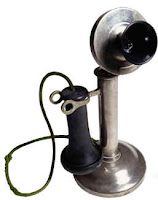 I've complained about this on Twitter, but it's so bad that I decided it deserves a post here.

We got a "land line" phone as part of our cable-internet package. It's cheaper than not having it, and it's nice to have a reliable connection for calls and dialing into hour-plus work conference calls (a cell near my brain for so long isn't really my idea of a good time). So great. Or not.

Shawn and I have given the phone number to exactly THREE (3) people: my mom, his mom and my grandma. None of them have called on this number yet. BUT in the week since it was activated, we've received 27 calls. After the first couple telemarketer calls I just stopped answering everything.

I had forgotten how much I hate the shrill ring ... and the inability to just mute-that-crap if I don't want to bother with it (I did resort to unplugging the phone for a while during a crucial work call on my cell).

One sorta neat thing is that when someone calls and the TV is on, the caller ID shows up in the upper left corner of the TV - just like in the commercial that I hate so much. Not so useful if you know you NEVER want to answer the phone.

(Shawn added our number to the do-not-call list, but it takes a month to take effect)
at August 21, 2009