Just home from Ikea. Shawn is putting together a little kitchen cart thing so we'll have a drawer for silverware and a bit more counter space for chopping and what-not. There's even space for my Kitchen Aid mixer on the bottom shelf, so there's that.

Otherwise, GIANT bust. We were going to get more items, but in the U-Haul rental line we were behind the guy who got the last van. Just my luck. But we ended up not having a great shopping experience otherwise b/c most of what I wanted ... well, wasn't.

If we had rented the van I would have gotten a mirror closet door for my Ikea Pax closet thing, but I can get a full length mirror from K-Mart and put it on the bathroom door instead. We also would have stopped at Target if we'd had the van, but the free Ikea water taxi is one way back to Manhattan, the isle of no Targets.

I wanted some curtains. All Ikea had was ... not what I wanted. The curtains we used upstairs aren't long enough for this window - because of how the curtain rod is hung. No big deal, but it's CONSIDERABLY brighter in here than our other apartment. Gah. 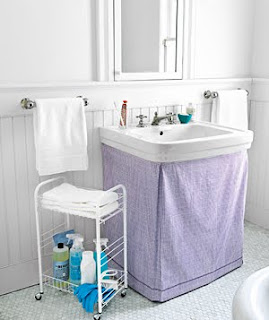 I really want a sink skirt for the bathroom pedestal sink (downstairs we had a vanity cupboard type). I didn't really think Ikea would have those, but it doesn't look like there are any nice ones to be found online either. I found one I like on Real Simple, which gives instructions to make one from a sheet. Uh, I'm sure I couldn't, and I'm sure if I tried it wouldn't look anything like the crisp neat box-style shown here.

We need a knob for a hand-me-down table that has a drawer but no pull ... probably can find one at a hardware store, but I thought for SURE Ikea would have some that would work. Negativo, unless we had a drill.

I want a counter top gap-stop thing to span the space between where the sink counter stops and the stove begins. It's much wider than the previous kitchen, and I know it will be filthy within a matter of days. I'm being uber-careful right now, but I know that won't last.

And Ikea of course didn't have the toilet paper stand I wanted, or even anything remotely like that.

The taxi ride back from the water taxi was excruciating. Lots of traffic and an idiot driver who talked on his cell phone (illegal) and passed the turns to get to our apartment. The taxi ride was ALMOST as much as it would have been to rent the van, had one been available.

Then there's a street festival here near our house. I went ahead and walked through it - NOTHING. I am looking for another bubble-style umbrella for NLP, but I'm thinking that will just have to be an Amazon purchase too. Looks like online shopping is in my future. So I guess that's not too bad. But have I mentioned lately how I feel about NYC?
at August 15, 2009

Email ThisBlogThis!Share to TwitterShare to FacebookShare to Pinterest
Labels: nyc