In August I have Friday afternoons off, so yesterday we decided to take in a movie. We saw GI Joe at the Village East Cinema. In their main theater, which clearly used to be a live theater and was grand with a gorgeous ceiling and drapery, we were two of four people. The screen was HUGE and we sat in the balcony and were dead center on the screen. It was very cool, and the movie was OK for what it was. I really like the Black Eyed Peas' end credits song. I forgot that upbeat music makes my body (or any body probably) want to move. I should keep that in mind for exercising purposes!

So today we woke up with the idea to DO something, but it didn't feel right to just go see another movie. I mean, we live in NYC, surely there's something new to do. Initially we thought about The UN, something we've never explored, but in the end we decided to stick closer to home and visit the Museum of Sex. The main exhibit was a scientific look at animals' mating and procreation, so overall it was pretty interesting. The upstairs was something else though ... but it was educational and eye opening. 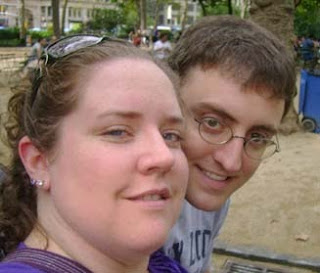 After that, we were in the Madison Square Park area and decided to check out The Shake Shack, which was something I've heard about on The Food Network's Unwrapped and elsewhere. Even though we've lived in the city for coming up on two full years, we've never been there. The line is always long (there's even a webcam so you can check the line before you go out and brave it), so they must be doing something right. The prices are also relatively cheap.

This picture is of Shawn and me waiting in line to order. I think all together it was worth the wait (tasty burger and super-thick shake) and a really good late lunch/early supper, given the timing when we were there. (And our wait was less than 30 minutes I'd say.) But the Oklahoman in me still thinks it doesn't come close to the yum that is Braum's...

Before we left I made a video tour of our apartment, which I uploaded to YouTube in private mode. OF COURSE you can only share private videos with other YouTube members ... so I'm searching for a solution (I only want to share the video w/ people I've vetted ... not that it's interesting but it does show our address and all our stuff ... not that it's really worth stealing, but you get the idea) ... I think Vimeo might be the ticket. The video is uploading now but needs to be converted before it's viewable/share-able.

Anyway, I think with this program I can send e-mails to those I know will be interested in seeing the bland apartment video (really it's just a tour of the place ... and the camera shakes enough to think that I've got the palsy or something). The e-mail will include the link and password to access the video. If you don't get an e-mail from me/Vimeo and would like to see the video, shoot me an e-mail and I'll set it up.
at August 22, 2009