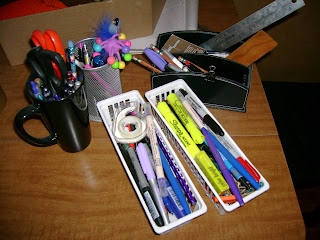 Here's my pen collection -- an image that I had transferred while we were still in New York. I have way too many writing implements, but it doesn't look quite so insane here. I didn't do much weeding out before packing.

We are in Auburn, Alabama. Free wi-fi and we had a swim after eating at a nearby Waffle House. It was SO CHEAP and moderately tasty.

The trip so far has been fine. Shawn does all the driving, and I know if it's boring for me it has to be triply boring for him. Ugh. We'll be there soon enough. We're staying one more night on the road, and on Thursday we pick up our car, get the truck unloaded and return it. Then the real fun, unpacking, begins.

It was hard to leave Danville and Shawn's folks. We have such a good time with them and it's easy and relaxing. But I have to keep steeling myself and be prepared for the good that's coming. I just have to let it.

Shawn doesn't have any anxious feelings and remains calm, cool and collected. I've never seen anything like it. I'm freaking out ... at least internally ... about how I'm going to adjust (to everything including the heat), if I'll remember how to drive well, if I'll like the people I'm going to work with, if I'll be good at the work, if I have enough work clothes that fit, if I'll be able to keep up the exercising once I figure out the gym situation, if ... if ... if!
at August 10, 2010

Email ThisBlogThis!Share to TwitterShare to FacebookShare to Pinterest
Labels: shawn