Yesterday I finished a dinosaur hat for a friend. It's his birthday today -- he is 3! I still might add braided ties to the ear flaps, although Jane says they aren't needed and I kind of like the hat how it is. I still need to wash it to rid it of any lingering cold germs.

I hope I'll get to see the friend later this week to give him the present. Last month I'd babysat for him and his siblings (I had five kids for about an hour -- including two babies -- and I survived!), and I'd asked him if he'd like a dino hat and if yes what color. He chose blue with orange spikes.

We weren't invited to his party even though his mom told me about it -- it was weird because we always come to his older brother's (he and Jane are the same age/long time friends). We met at the park a couple weeks ago and were comparing notes on renting bounce houses. She told me they were getting one for little brother's party, where they were having it but not exactly when/what time. So I didn't push it or ask anything else. Kind of a delicate social awkwardness that I find myself in plenty... 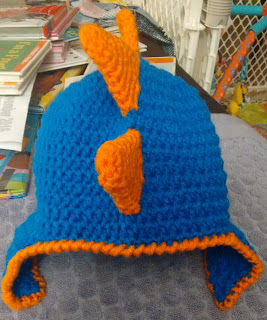 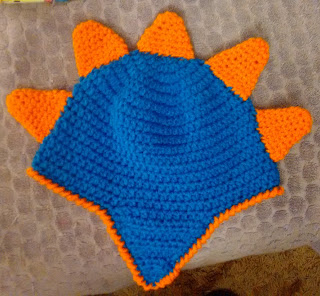 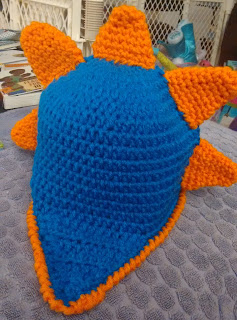