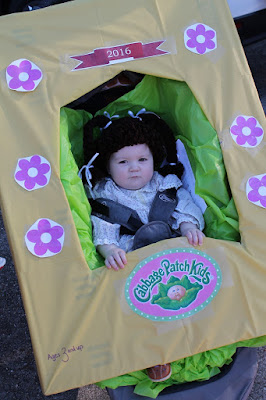 For Liv's first Halloween I dressed her up as a Cabbage Patch Kid doll. I don't remember how or why I saw the idea, but it combines crochet with nostalgia so sign me up!

I started by crocheting the Cabbage Patch Kid hat/wig, which was pretty easy and a riff on a regular baby hat (of which I've made so many I can nearly do it in my sleep). I learned a new stitch following this pattern and its video. But instead of making the whole hat with that stitch I just did the brim area. I did braids instead of big puffy pony tails. I may be remembering wrong, but I think my Cabbage Patch doll (Justine?) had braids. She definitely had this dark brown hair.

For the stroller box I had intended to use a more square box, but it ended up being too small. Shawn had ordered some baby gates that came in a box that ended up working out perfectly. "Real" Cabbage Patch doll boxes have clear cellophane across the top, but this one is cut out in the back and front with an opening for the stroller handle. The box slipped over the stroller easily, which made for simple transport.

I used plastic table cloths (about $1 each at the dollar store) to wrap the box and to place on the stroller for her to sit on. If I'd been more intense I could have painted the box and/or added green trim around the box opening. It's clear I free-handed everything. And I like the hand-made/laziness it evokes.

I printed the Cabbage patch logo, some generic flowers and a 2016 ribbon (which I made in Word) and cut them out then taped them on with shipping tape. When I was putting this together I ran out of tape. I swear I go through packing tape like crazy ... and we haven't moved in more than five years, so I don't know where it goes. Luckily I started before I needed the costume finished and had time to buy more tape.

I printed a "birth certificate," although it isn't really visible in the picture (it's by the baby's left shoulder). I used the logo and copied a certificate from online in style and used my baby's name and birth date. I taped it in place too.

My daughter wore clothes and shoes of mine from when I was a little girl, so vintage early 80s stuff. It really completed the look, although the wig/hat itself was enough to get the point across!

The costume was a big hit at our church's trunk-or-treat, and some of the trick-or-treaters even stopped to take their picture with her! I thought that was kind of neat. (Also many of them were like "huh? what's a Cabbage Patch?" but it was the moms who got it!)

Jane wore an Iron Man costume, and I'll have a post about that later this week.
at November 02, 2016