What I Watch: Cougar Town and Dallas

Two shows that are on hiatus and are more than a little embarrassing to say that I watch. 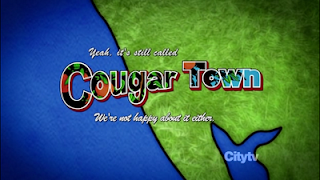 I started watching Cougar Town when it premiered -- I think the same time as Modern Family -- because it's created by the Scrubs people (and I love Scrubs) and just kept watching it because it was so wacky and weird.

The show is about a group of friends in their 40s, love to drink wine and play a game called Penny Can. They live in Florida. Originally it was about a divorced woman (Courteney Cox) going after much younger guys, but it evolved into a much better show. The title doesn't make any sense now, but they make jokes about it in the title cards -- a blink and you'll miss it kind of inside joke I guess.

It was on ABC but apparently is now moving to TBS starting on January 8. I'm glad I looked it up, as I'm not sure my DVR will automatically record something that's on another channel.

The revamp of Dallas wasn't something I was interested in watching BUT my mom and aunt were here during the series premiere and we decided to have a look. It was so bad it was good. And even Shawn got nostalgic and would watch it with me.

I don't know how they're going to handle the next season now that Larry Hagman, aka J.R. Ewing, is dead. My mother-in-law said they'd already filmed the next season (or next part of it, since it's a TNT show with split up seasons) so at least they can write him out gracefully. Sadness.

One of the lead characters is played by an actor (Jesse Metcalfe) I first saw on the soap opera Passions. That show premiered when I was in high school -- maybe the summer right before college, and so I watched it religiously for a while. Eventually I stopped and they don't make it anymore. It was REALLY bad.

Passions also had the guy who played Keith on later seasons of Scrubs, so maybe he'll show up on Cougar Town in future seasons (lots of other actors from Scrubs have been on the show), and it will make these two shows being in the same post make a little more sense. Basically writing two-for-one because I'm running out of days in NaBloPoMo!