What I Watch: Bones 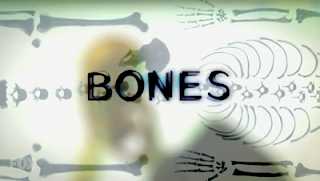 Now that Major Crimes is on hiatus, Bones is probably my top Monday show. It's nearing its end, thankfully as it is getting hokier as it winds down. This is another show I got sucked into via watching at my mom's and then TNT reruns (I watched many after work in NYC, sometimes marching in place while I cooked dinner -- oh to be dedicated to exercise again).

Anyway, it's another "crime procedural" but it's got a heightened sense of comedy. There's some slapstick and weird, fun situations where the characters go undercover and/or dress up to try to catch the criminals. That also means there are more groan-worthy moments.

The sexual tension is gone now that the two lead characters are together and have a baby together ... who is almost never in the show and they never talk about who is watching her -- such a giant storyline hole for the mama in me. The main character is pretty preachy and a big know-it-all (she has shown remarkably little growth over the course of the series, other than attempting to be in a love relationship with the other lead character), so I have been surprised that there wasn't any preaching about the benefits of breastfeeding and/or specific ways of rearing a child, since that would have been absolutely in character for her. I don't know why they had to write a baby into the storyline if they were just going to ignore it/not mention it anyway. I guess that's TV for you.

Basically it's still an enjoyable show, but I'm not as invested in the characters as I probably was once. So many bad things have happened to them -- different serial killers have targeted them, etc. I don't have a problem with it being unrealistic, but at some point it starts to feel like enough. (See also Grey's Anatomy in a few days!)

I also think because I have been watching so much that when the characters make super dumb decisions or act out of what I understand their character to be I get even more frustrated than I would if I were watching a new show and didn't have as much back story in the mix.
at November 03, 2012

TWO BROKE GIRLS is the best!

Perhaps the pregnancy was just to end that season with a bang.