Four years ago I pulled a lever in New York City to vote for President Obama (although judging by that post I wasn't as passionate as I feel this year ... although I'll give the bedbugs some credit for that!). This year I pushed some buttons in Baton Rouge, LA, to vote for him again (how funny are the little icons -- I didn't realize that as I was voting. Is that for someone who can't read?!). Both times my vote didn't really "count" because neither state is a swing state. But it's still important to vote.

I also think it is important to share our convictions with others BUT I can say it gets super obnoxious on Facebook with people I disagree with. Honestly I will never see some people the same way based on the absurdity they've posted.

We've been getting a lot of electioneering calls, including one yesterday that was asking me to get on a bus to Philadelphia to help get out the vote (since Pennsylvania is a swing state). I think it was a mistake, since there wasn't enough time for a bus to get to Philadelphia in time for the election even if it left at the time of the call. So that was bizarre.

Otherwise the calls have been local, vote for this so-and-so for a certain judgeship, etc. (Is it only me, or does it seem bizarre to campaign to be a judge, when your job is essentially to be non-partisan and interpret the law without bias?)

I let Jane push the button to "cast ballot," but first while I was reading through the amendments and such she peeked around me and opened the curtain to the booth, flirting with the people outside. I heard people say "that's the cutest thing I've ever seen." I wished I'd had a picture of THAT. This will have to do, of us in side the voting booth: 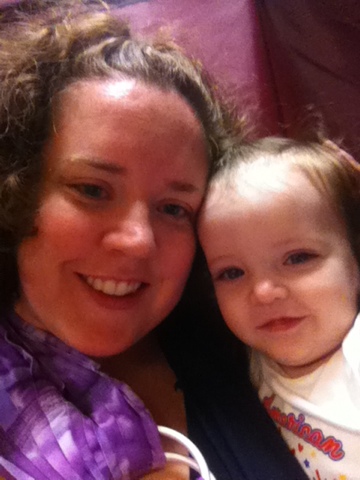 I walked to our polling place, just like I walked in New York (although it was quite a bit further here in BR). Because my name is in the second half of the alphabet I was in a much shorter line and was in and out within 15 minutes. Other people were waiting 30+ minutes and I'm sure longer, especially as a nursing home bus showed up as I was leaving. I hope everyone in the swing states has as an efficient and easy time voting as I did (although I know that's not going to be the case).