I can’t believe how many people smoke here – and with an abandon we don’t see in the States much anymore. Have these people not heard of lung cancer, or second hand smoke dangers?

Shawn's colleague told us what all the locks we've seen on the bridges mean: LOVE. Kinda hokey, but apparently couples will have a lock engraved (or in some cases scribble on it with marker) and put it on a bridge. Makes me wish I had one with Mari & Shawn engraved on it! 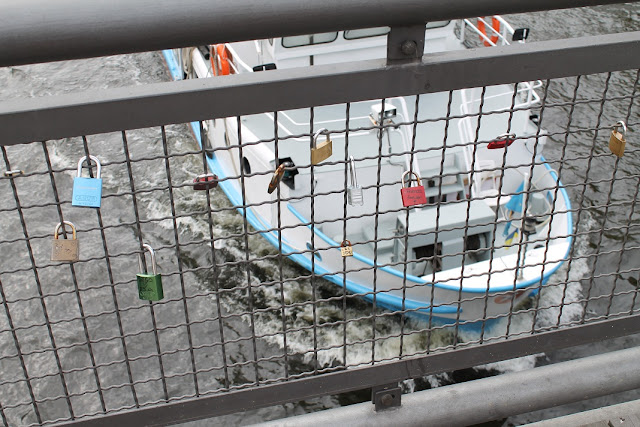 August 12 -- Today we went to a flea market and it was JAM PACKED with people. We took the stroller, which was ill-advised, and after shouldering through a few of the aisles we finally gave in and parked outside of the market. We ate currywurst from a stand (tasty!) and Jane got to play with a German baby who was also seeking refuge from the crowds.

Shawn and I each took a turn going back into the market (him mostly to buy food and me to shop a bit), but even without the baby it was just too crowded to do much shopping (not to mention the whole language barrier thing, which still makes my stomach hurt).

You can fix the horizon in photoshop or call it an interesting perspective.