August 9 – Today Jane and I took our first solo trip on Berlin’s subway system. S2 from Oranienburgerstrasse to Potsdamer Platz, transfer to U2 to Wittenburgplatz. Destination: KaDeWe, the largest department store on the continent and second only to Harrah’s in London for largest in Europe. 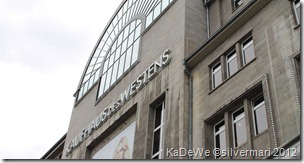 We took the stroller, but navigated the subway with the Ergo and Jane strapped on my back. I had a little trouble figuring out the transfer – mostly because the U and S systems weren’t in the same building.

When we made it to the store I first made a stop at a big post office and bought some postcard stamps. I consulted my phrase book, got in the correct line and completed the transaction almost entirely in German. Then we went into the store and I plopped Jane back into her stroller.

The department store is huge, but it didn’t feel as big as Macy’s in Herald Square. I’ve been to Harrah’s too, but not as often as Macy’s so not sure I can compare. We walked past the baby clothes (too chic for our tastes) and found the gourmet food floor. We bought chocolate souvenirs and later some Ampelmännchen souvenirs.

The trip back to the guest house was pretty easy too – Jane rode in the Ergo on my front and fell asleep just as we rounded the corner back to Ziegelstrasse. Juggling a baby, stroller and packages is no joke. I’m sure I couldn’t do this full time. It’s going to be a miracle if I survive these two weeks intact.
at August 23, 2012