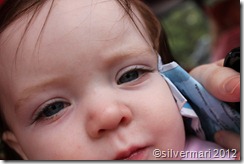 August 8 – SOMEONE mostly slept while we were on a sight-seeing bus tour, but that was OK since she didn’t have to pay and it gave me more time to listen and look around.

I was able to take my stroller on board, and the driver stowed it for me (it folds down to almost nothing, but they wouldn’t let it sit in the seat with me). I trusted that it would still be there when we were ready to get off – and it was! 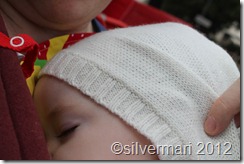 We rode up top, and no one sat with us even when the top was mostly full. There were glass windows protecting us, so there was no danger of falling out – but Jane stayed in the front-carry Ergo anyway, which made for a good place to sleep. It was also cool enough that she got to wear her sparkly hooded sweater!

I had a hard time deciphering the various websites of the bus tour companies, and in the end I picked the one-day option (since I already have a regular subway transit ticket for the next week). I spoke to the street side employee and made sure it was a tour with a live guide speaking English (as per my Rick Steve’s Berlin tour guide book suggestion).

The tour guide said everything in German then English, and I found I could understand some of the simple German things. He didn’t add much color commentary though, so it was mostly what I could have read in a guide book.
Here are some of the non-Jane pictures I took: