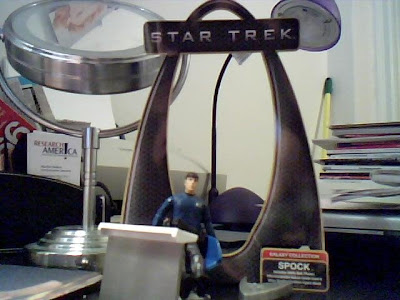 Look at this! It's a Spock figurine that my mom just sent me. It's made to look like Zachary Quinto. HA! He's going to be working alongside me on my desk from now on. AND he even has a change-able hand ... He can either hold the phaser or do the Vulcan salute (or Vulcan Valediction, as Shawn and I have dubbed it). He even has his own work station and chair! Science Officer reporting for duty! HUZZAH.

The black cardboard thing is just for show/the packaging, although I'd be lying if I said I wasn't going to cut the Star Trek part out and affix it in my planner.

The silver/grey thing beside his name card is the Star Trek emblem. It says it's a figure stand, but I have no idea how he's supposed to stand on it. It does, however, seem to clip nicely to my shirt.

Also in the picture, a non-plugged-in purple lamp, a mirror that's almost always flipped away from me unless there are pores to inspect, my new business cards - you never know when you'll need to hand some out (or you do know and the answer is never because you work from your apartment, but I digress). You can also see the stack of magazines - we traveled a lot this month is my excuse. Photo taken by my webcam, hence the bad quality.

The REAL reason my mom sent me a package was the fact that our anniversary is Saturday. We saved our wedding cake top BUT I was dumb and didn't remember to bring it back with me during the Easter trip home. So my mom bought me the box cake from which it was originally made and sent that to me along with this and some other surprises (purple Post-Its! purple pens! a book! a T-shirt!).

Now I just need to make the cake, which I will do with my wedding gift stand mixer (in purple, natch) and make the buttercream icing recipe sent by Aunt Lee Ann via Beth. Coretta, who made the actual wedding cake, used some coconut flavoring in the icing, so I will do a bit of shopping for that tomorrow. It will be a mess but it should taste good. In a perfect world I'd make the cake tomorrow and freeze it before frosting on Saturday... We'll see. Maybe I'll practice cake decorating and post the results. Or not.
at May 28, 2009