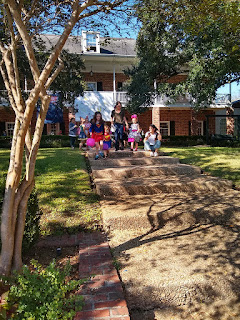 I took the girls to Trick-or-Treat Down the Row at LSU's Sorority Row for the first time this year. I kept googling, thinking I would find a post about what to expect, where to park, etc. But nothing other than a few LSU communications posts that were vague and mainly about cute costumed kids and some departments that come out to pass out candy too. So I thought I'd write what I found out after checking it out last Sunday.

The parking was kind of a madhouse and what I was most worried about. We were lucky because Shawn just dropped us off then went to his office before picking us up. There's a parking lot by the U-Rec, the student recreation center - and where Shawn works out, very close to the south side of the row. We were able to pull in there so we could get the girls out of their car seats.

We were only able to stay for one hour, from 3-4, although the event goes 3-5. By the time we left in the middle the parking situation was insane -- people parked on the grass and lots completely full. There was a police officer at the barrier blocking the street for pedestrians, but it didn't seem like parking tickets were being given out. There might be more parking on the other side near U-High, but we only saw that end of things on foot and didn't make it to any parking lots.

The event itself was really fun, and an hour was almost enough time to see everything. The LSU athletic department was at the Lod Cook Hotel parking circle, at the opposite end of where we started. They had lots of activities that took more time, but Jane only did a couple (throwing a football with football players and bouncing a volleyball with volleyball players). If we hadn't been in a time crunch because of swim lessons at 4:30 we could have stayed until 5. Some of the houses had activities like crafts or face painting. The girls did one pumpkin craft but we didn't wait in any face paint lines (it would wash off at swimming anyway so I didn't have to fight with them about it).

We did go up to every house and get candy. For the most part the candy was just fine. When we sorted it -- mainly non-chocolate candies, although there were some Reese's and Snickers. The girls were just happy to have full pumpkins for their effort -- and they like non-chocolate candy just fine. At most of the houses the kids would stop at multiple girls (or boys) to get candy -- so each house could net several candy distributions. Some even let the kids reach their own hands in, which is a good deal for Liv who will take 1 or 2 and a bad deal for Jane who will grab as much as she can!

When we started there was a huge line at the first house on the row waiting for the 3 pm start time. Rather than wait in the line we walked to the second house, and were able to go up just before 3. We were in crowds, but we avoided having to wait very first thing. We hit the first house on our way back out so we got candy from every sorority/fraternity participating.

The costumes were really fun, and a lot of grown ups were dressed up too. We saw a LOT of other Wonder Women and Super Girls, including at least one dog dressed as Wonder Woman. Every time I'd say "Super Girls unite!" or "Wonder Women unite!" Some people thought it was funny, others didn't (including Jane!).

The weather was absolutely perfect -- warm enough but not quite hot with a light breeze. I should have worn sunscreen (I don't know what's wrong with me because I put sunscreen on the girls every day before school for their 15 minute recess!). We had the stroller so had water and a place to hang the buckets as they got heavy (and to push Liv as she couldn't walk the whole way). Walking back was faster because we walked on the sidewalk by the lake, away from the houses. It was still crowded with people, but we were able to maneuver back quickly enough to meet Shawn and scoot off to swim lessons.

If the weather and timing is right next year I definitely think we'll check out Trick-or-Treat down the Row at LSU again!
at November 04, 2018