At Your Own Risk 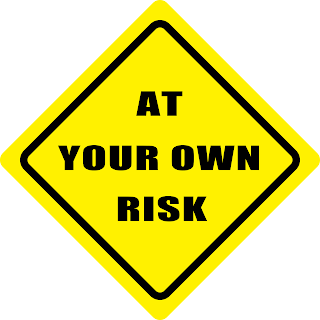 Driving on campus is perilous, and I do it at least five times a week to pick up Jane from school. This week I also dropped her off two mornings while Shawn was home with repair-type people.

First are the pedestrians - college students who are paying no attention. I can usually manage to be safe when they're in the crosswalks lollygagging, listening to music and staring dumb-facedly into their phones. But it's when they randomly step off the curb into oncoming traffic that I have panic attacks.

Sometimes you can get caught at a class change, mainly on MWF because we pick up at 12:30 and that's a class start time. Then you can be stuck behind several cars as a flow of seemingly hundreds (probably just dozens) of students ambles along slowly.

Second there are the bikes, and I think they're worse. Some bikers act like vehicles, i.e. obey the law, and others ride on sidewalks, shoot out into cross walks or simply ride in the street going the wrong way. My heart has dropped on many occasions worried about hitting someone.

I remember being on the other side of the equation when I was working on campus and had to cross a busy street. State law requires stopping for pedestrians in a crosswalk. I shook my fists OFTEN at cars speeding down Nicholson Extension as I tried to cross, including when I was 9 months pregnant.

I guess the bottom line is people are the worst -- either as pedestrians or drivers. And all I can do is try to NOT be the worst and be a civil and courteous driver. But it sure frazzles my already frayed nerves.
at November 18, 2015