On my field trip on Thursday we were in marsh, which means gnats apparently. I'm learning a lot about my new state ... and I have the bites to prove it. Of course my body is whacked out and reacts in a delayed fashion. Seriously still finding hives or welts now and flipping out about potential bed bugs. Shawn has checked the bed, we've washed all the sheets and thankfully nothing. If they are bed bug bites I probably got them in the hotel. But probably a better bet that it was the gnats, since I checked the hotel bed before I went to sleep!

The field trip was OK. Certainly better than I expected. I worried about sea sickness, but I didn't take bug spray! Like I said, I'm learning... Anyway, the beauty of the water and expansive skies never fails to amaze me. Just like when we were out on our cruise, I was blown away by the beauty of sea and sky. There was a time when it was loud on the boat and no one was near me as we skipped along the water so I sang a little bit of Awesome God.

My photos were pretty lame, but the videographer got some good stuff AND we saw dolphins! Apparently they follow the boats. 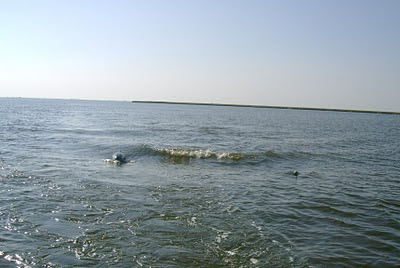 I'll add the videographer's photos of me soon. I have so many posts going in my head but will have next to no time this week to write. IF I were smart I would have pre-written some this weekend. Maybe next weekend ... although starting next Monday, Nov. 1 I'll have to make a post a day no matter what!
at October 24, 2010

When you're at a football game and you can't tell the difference between various nearby bugs and the game ball, then you know you're in Louisiana.