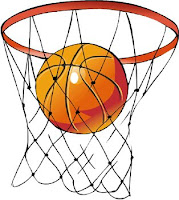 My mom told me the craziest story about the high school girls' basketball coach at my HS alma mater. I wonder if it was covered in the local paper or if it's just a small town gossip thing, but yowza.

Today Shawn and I went to an NYU women's basketball game - we missed the men's game that was the first part of the double header. They played Emory university. The boys lost by 1 and the girls won by about 10 points. The girls are so unconditioned - they can't fast break or even move on the court as much as I (in my infinite wisdom) think they should be. But they won, so what are you going to do?

There are dancers and cheerleaders at the games, and I find myself comparing them to the cheerleaders and dancers of OSU. The OSU girls were always so coifed and made up - heavy make up that was clear to the audience/crowd. Plus the OSU cheer squad had men cheerleaders who made things more interesting and could do more inticrate and higher throws. The NYU dancers though are the ones that really fall flat, imho. They have sloppy ponytails (yeah, I know, look who's talking but I'm not a dancer in front of people) and little make up. A stark contrast to the glittered and curled girls of OSU. BUT I also know there are differences - OSU girls could/were televised (NYU doesn't even have cameras at typical games it seems). Just interesting contrasts.

The NYU pep band played Green Day's "Basketcase." I remember Sarina singing this in the locker room when we were in middle school/early high school. So this song is EASILY before the current NYU undergrads' time. Weird that they play it, at least to me.

And the weirdest/random thought I had while walking to the game was the sudden realization that I couldn't remember the "high five" elements that a good news story needs to have. Wracking my brain and I think I can remember them correctly: News, Scope, Impact, Context and Edge. Yeah, I'm pretty sure that's right. For what it's worth.

Now to finish up the first blanket for my friend's twins - it's taken me SO many weeks because I used such small thread. I'm not sure how I'll bring myself to make the mirror image one for the second twin ... but I know I will. I just hope I can get the second one done before the babies come! And I have another project to start and finish for another friend's baby girl - an ABC blanket - before I can get back to the bedspread project...
at February 22, 2009