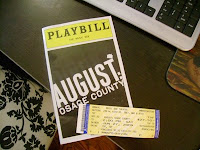 On Saturday Shawn and I went to the Music Box Theatre for one of the last performances of August: Osage County, a play about a family's reunion one August in Osage County, Oklahoma (near Tulsa).

Phylicia Rashad starred as the matriarch, so she brought the star power.

The entire play was amazing though. I loved being surrounded by the (fake) Oklahoma accents - some were spot on, especially the Aunt Maddie Fay and Charles characters.

We had great seats because of the NYU discount - we were on the main level (we used the binoculars anyway) at the very back. Not quite as close as "reasons to be pretty," but still better than nosebleeds I guess.

Here's a picture of Shawn's new shoes (plus his old ones in the background). How cute is he?! 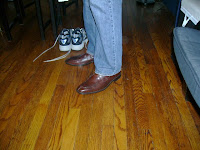 Oh!! Those are really nice shoes!! They looks good on him!!