Instead of packing LESS in my backpack carry on (which I've bemoaned the weight of previously) I actually made room somehow for one more item: Kidz Gear Wired Headphones. The $20 price tag was SO worth it during the trip. It's a Thing I Bought That I LOVE.

I had decided to buy the orange version, but before I hit purchase I showed Jane the page and she picked purple. She is her mother's daughter, although I had some color regret when they came because she really couldn't care less what color they are.

After they arrived from Amazon I let Jane try them on, to be sure they fit and that she didn't run screaming. She was very interested in them, but I put them away until the trip. They came out on the airplane to Atlanta and WOW. She kept them on and listened to songs (some new-to-her ones ripped from a Disney Travel Songs CD given to us by Gingie). It made for pockets of relaxation on the flights, as she could be occupied and quiet without parental intervention. She would also simultaneously read a book, play with stickers or draw on her Fisher Price Travel Doodler Pro (another TIBTIL that we also used on our Minneapolis travel).

During our trip the FAA rules changed re: using electronics during flight. Now you can listen to your iPod, read on your Kindle, etc. from gate to gate. So on our flight from Raleigh to Atlanta we did that just because we could. On the podunk regional jets they are sticking to the "no electronics until over 10,000 feet rule" for a while longer, so we couldn't do the same from Atlanta to Baton Rouge. No big deal.

A great feature is that the sound is limited, which means she can't crank up the volume high enough to hurt her ears. That isn't a huge issue now because I don't actually let her handle the iPod while she wears the headphones, but probably a feature we'll appreciate in the future. It has a volume control on the cord too, although she didn't really mess with that much.

The headphones were key during our trip too. On the long walks on the National Mall or rides on the Metro or sitting in a coffee shop while I talked with friends Jane could have her headphones on and be entertained at least for a bit. They also facilitated a couple stroller naps, which are basically unheard of in our day-to-day life!

During our 2.5 hour layover in Atlanta on the way home we popped on the headphones, reclined the stroller and Jane headed straight to snoozeville for a good hour nap. Not as good as a crib nap of course but better than running solely on cortisol and cheddar bunnies (although there were plenty of those too!). 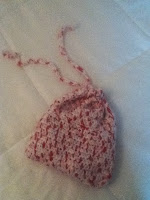 I crocheted a small drawstring carrying pouch for the headphones, although you can buy carrying cases with the Kidz Gear logo. I'm not interested in paying extra for something I could make with the overflow yarn I have hanging around this joint. I basically made a chain the width of my bag then started crocheting in the round -- first single crochet then half-double crochet with a few random rows of single thrown in to give it some dimension (or something). I used a variegated yarn leftover from a baby blanket. It kept the wire from getting tangled in other things in my bag.

The headphones held up well on this maiden voyage. Time will tell if they are as successful down the road as they were on this jaunt. I'm hopeful and would certainly buy them again if we wear them out with joyful use.

I am impressed that Jane used the headphones. I imagine David would not even let me put them on his head. I think we may have to wait awhile to try something like that. Never the less, great idea!