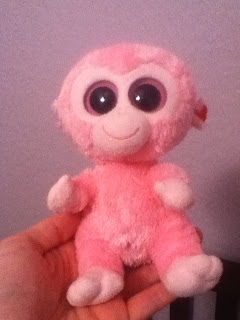 While we were traveling the fall consignment sale for Rhea Lana Baton Rouge took place. I was very bummed to miss it, so I did a quick Google to see if there were any consignment sales happening while we were in the DC area. Lo and behold, there was one the first weekend we were there, and it was about a mile from our hotel in Greenbelt! SCORE!

So before we headed to Annapolis that first Friday I took a tired baby on my back and bought a few things. It was amazing fun as usual. (I think I like consignment sales too much AND I really don't need most of the stuff I buy. Also not a good idea to talk about it -- I made a friend's eyes glaze over talking about my rapture ... and she has two little kids so could somewhat relate!)

Everything was 50% off on Sunday, and since we were so close and I could sneak away by myself before we left to go to a friend's house for brunch I went back for another look. That's when I found Creepy Monkey (even though the picture doesn't show it he has a tail so definitely a monkey).

He (she?) was in a bag with a Care Bear and a lady bug ball. Jane has a Funshine Bear that she likes a lot, and she loves Care Bear books. This one was Cheer Bear and had a rainbow on its tummy, so it fit with my rainbow birthday theme. So for $1.50 I figured why not, and I planned to donate the monkey and lady bug when we got to Danville (or leave them for my mother-in-law's house toys-for-Jane collection). I gave Jane the Care Bear at some point during the trip, but the monkey and lady bug were just hanging around in our room.

Jane saw them and begged for the monkey. She was so excited. I started calling him creepy monkey, and the name has stuck. She had been sleeping with her Bert and Ernie dolls, which was a first in terms of wanting something to sleep with. She started chewing on those so I took them away as sleeping toys. Creepy Monkey stepped up to fill in.

Now he's a fixture in her crib and she asks for him before naps and bedtime. I washed him when we got home (no dryer) and he's fluffed right back up no problem. I haven't had any luck figuring out what kind of toy he actually is (should I need to replace him). I don't recommend googling "creepy monkey" either -- yikes!