We got out our Christmas tree today and a few other decorations (including a ceramic Christmas tree that plays Winter Wonderland that was my Gran's ... I finally talked my way into her giving it to me since she doesn't put it up anymore). Maybe that's jumping the gun, but I wanted my in-laws to see the house decorated a bit, and I want to stretch the magic with Jane as long as I can!

One of the things I have been looking forward to the most was making a felt Christmas tree for Jane. The idea is that she'll play with and decorate her tree instead of bothering the actual tree. Time will tell if that's true, but she's had fun carrying around the felt ornaments I made, and they stick to the felt tree beautifully.

I used a combination from two tutorials: Empty Bobbin Sewing Tutorial's No Sew Felt Christmas Tree and Juggling With Kids' The Secret to Cutting Felt & Making Felt Storyboards for Preschoolers.

The tree was pretty easy -- Shawn actually did the calculations and cut a half-yard of green felt into a triangle. And I used half a sheet of brown felt for the trunk. We used double-sided scotch tape to attach it to our brick wall in the sunroom. It's only been a few hours, but it seems like it will stick no problem.

For the ornaments I first scoured Google images for plain ornament and Christmas-type icon outlines. I have bells, angels, candy canes, round ornaments, lemon-shaped ornaments, gingerbread men, bows, stockings and stars. I tried to use some cookie cutters to make patterns, but that just didn't work. I think finding printed images of cookie cutter shapes would be good because they need to be simple lines.

I printed out my Word doc (which I created to be able to size the outline drawings to my liking) and put it under freezer paper. This stuff was KEY to easily making the ornaments. It has plastic on one side that melts when you hit it with a hot iron, just enough to attach temporarily to the felt. This makes cutting out the ornaments a breeze -- no pinning and no freehanding. Plus, like Juggling with Kids states the templates can be reused a few times because they'll stick again when ironed onto another piece of felt.

All together it was a pretty cheap endeavor. The green felt was on sale, and the sheets of felt were less than a dollar each (usually two or three for a dollar, although the fancy white sparkle and blue/black swirl were a bit more). The freezer paper is pricy, although I only used a bit of it. I already had some felt glue from something I made Owen ages ago, so that was how I attached the stripes on the candy cane and Jane's name to one of the stockings. I think hot glue would work too (and somewhere I read that hot glue can be used to attach felt to brick without damaging either, but I didn't try that).

I love the way it looks, and I still have enough green from the yard I bought to make a second tree -- originally I was going to take down ours and try to get it to Oklahoma for continued Christmas play, but it might just be easier to make a second triangle to not have to deal with the sticky tape. I don't know how I'll store it for next year, but I'm sure that I'll want to pull it out -- it's also just a really cute decoration! 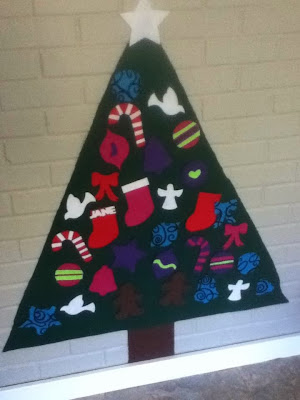 It is totally cute. I love it. I have some 8X10 squares of felt that I'll dig out. I think there is brown (Reindeer? Christmas teddy bear?) and green (wreath? Holly? Mistletoe?). Should we make a separate set of ornaments for the Oklahoma Tree?