Rainbow Party for a Second Birthday

While we were in Danville with Shawn's family we had a party for Jane. It was mostly an excuse for everyone to come over and visit (limiting the number of trips we had to take trying to see everyone on a six-day trip). It ended up being really fun.

I decided on a rainbow theme way back -- I think inspired by a rainbow layer cake that looked wow-worthy. (After my amateur baking fails at Christmas, I thought this could be a chance to redeem myself. Silly Mari.) After remembering my aversion to food dyes for Jane and the lack of proper baking equipment in my mother-in-law's kitchen I scaled back my baking efforts to a pumpkin cake (lower sugar and easy to make in bundt cake pans), but we had rainbow decorations.

Happy Birthday banner from the dollar store (bought by Grandma)

Second year around the sun photo retrospective -- my 24 favorite Jane photos from Nov 2012 - Oct 2013 (not including our DC trip of course).

Arch of rainbow balloons on the carport wall -- was cuter in my imagination and we should have started with a red row of 14 instead of 12, working down to a row of 4 purple. It looked great from the road though and added to the festivity.

The best way to do it is string the balloons (which we did the day before the party and hung them the morning of). I used size 10 crochet thread (which I can use for actual crocheting later/once Grandma and Popeye come visit and bring our overflow baggage) and a tapestry needle. Then we poked that through the necks of each balloon to get a string of each color. We used regular tape to affix to the siding and they stayed up several days -- at least as long as we were there. I haven't heard if they've fallen down yet, although they were starting to lose air from the temperature fluctuations and just time.

After last year's helium shortage I really wanted to get Jane her own balloon for her second birthday. I bought this "2" from Oriental Trading, not realizing how big it would be (almost as tall as Jane!). In the end though I had it filled with air (that much helium would have probably been pretty pricy). The party store also did some rainbow balloons and squiggles and added a weight at the bottom so that the balloon centerpiece stood up. Jane kept saying "pop it!" So she didn't really get to play with it much. 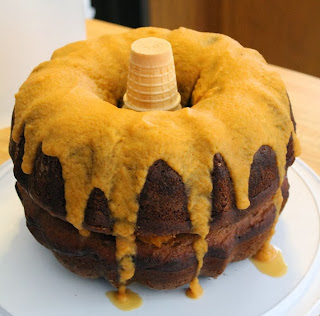 The cake ended up being very cute and was complimented a lot. It definitely tasted "healthier" -- lower sugar and with 1/3 whole wheat flour.

The icing/glaze was just leftover pumpkin (probably 1/2 cup) mixed with powdered sugar and a bit of milk. So it had a nice pumpkin flavor and color.

The ice cream cone stem was supposed to be green, but we forgot to look for it earlier and ended up just using what we could find at the last minute.

I forgot to put baking soda in the bottom cake, so it didn't taste as good/have as much lift. But we only served the top cake at the party so that was all OK. 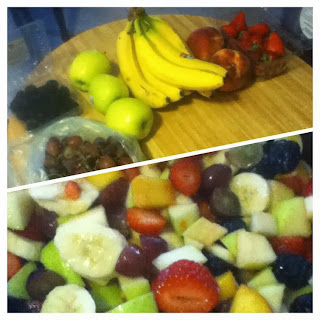 We also made fruit salad and pasta salad, both rainbow-style. I had toyed with the idea of making fruit pizza, which could be designed to look like a rainbow. But after tasting the test version Shawn didn't think it would be a good idea for his family. The recipe also took several ingredients my mother-in-law didn't have, and I wasn't up for buying more when it came time to make the decision. The fruit salad replacement was a big hit -- I had thought about doing a fruit tray with the rainbow colors layered out, but in the end I thought the fruit salad would be easier to eat. And it was well received -- with no random bits of fruit left if one color didn't taste as good as the other. 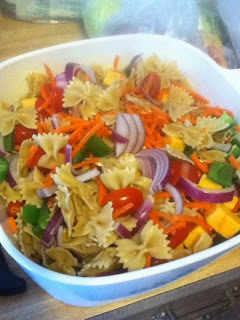 The pasta salad was the only thing that made leftovers. I didn't use a heavy dressing, which would have made it taste better. Instead it was dressed simply with olive oil and lemon juice. There was too much pasta to veggie ratio, and the red onion was overwhelmingly sharp. It looked pretty though. Here's what I used for the rainbow colors (fruit salad and pasta salad):

Today is Jane's actual birthday, and she is two years old. We are heading on ANOTHER trip, although this one is short and by car. We're going to have some fun in New Orleans before we come home and start focusing on prepping for the holidays. Grandma and Popeye are coming for Thanksgiving!