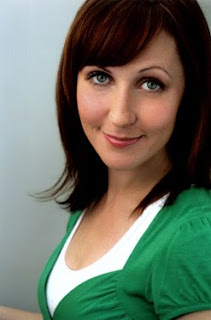 My memory is a funny thing. I saw an Ikea commercial sometime before Christmas -- only saw it once (it has since been aired much more often) -- but I was CONVINCED that I'd seen the actress playing the wife before, and I had a feeling it was at a play Shawn and I had seen. I searched and searched for who she was based on the commercial (it's the one with her and a red haired husband talking to their mattress like they're sports coaches). Although that search was fruitless, several months later I finally figured it out.
I saw her in The Good Guy last Sunday and figured I would be able to find her name, and I was right. She's Kathy Searle, which I figured out by looking up The Good Guy on IMDB. Then I searched for her name, found her website and ta da -- listed right there on the home page: Just wrapped the 2 and 1/2 year run of the Off Broadway hit "My First Time" directed by Ken Davenport.

It's been a while since Shawn and I saw that play, but for whatever reason her face and voice stuck with me, but I couldn't place where I had seen her. Mystery solved!
at February 27, 2010