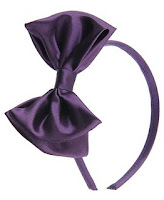 Not sure if I have the steam to go full out NaBloPoMo for February, "Ties," but the theme is intriguing, as is the idea of only 28 days.

So I'll start today and see how it goes.

Thinking about ties led me to ribbons, which led me to bows and the image on the left (the result of a Google Image search ... I don't own such a headband, and even if I did it would pop off my giant head).

The more I think about it, there are actually a lot of things I could write about in the ties theme -- neckwear (choosing the ties for the wedding, then getting into other types of neckwear), ties of family, ties to work, ties to locations. I thought about it a bit while on the elliptical. We'll see if I can make it work, but I won't officially commit until I have a couple days of February written. This counts though.

Also, I just received my typewriter love Valentines -- I ordered them on Etsy. I'm going to keep one for myself and frame it. That leaves me four to send. Even with shipping cheaper than buying four cards at Duane Reade, and they are SO.MUCH.CUTER.

Ah, and the cards were inside a waxed paper envelope (much like the ones my Gma Jane would send stamps in) and TIED with a darling bit of twine.
at February 01, 2010