Berlin with Baby: Getting Home

August 19 -- Our return travel was about as stressful as our travel to Berlin. We made all of our flights and they left mostly on time, but we had the same issues with Jane's ticket (it took about 20 minutes at every ticket counter to get her a boarding pass).

At the Berlin airport we had to take our stroller to "bulky luggage," even though in its bag it is smaller than our checked bags. The nearby bulky luggage station was experiencing "technical difficulties" (?!?!) so we had to trek across the airport -- and all the terminals are separate buildings so it entailed going outside to drop it off (Shawn did the last leg because I saw this ridiculously long hallway and almost sat down and cried ... and this was less than an hour into our 22+ hour trip!). The stroller made it to Baton Rouge though, so I can't complain too much.

Chuck Doo-Gull was more of the same madness. Lots of walking, wrong lines, etc. Having the baby helps infinitely because they do let you cut lines in Europe. Everything from security to boarding. In America there’s no such thing, but I guess there are trade offs.

On the long 9-hour plus flight Shawn and I weren’t exactly sitting together. We were across the aisle from each other. Uh… It actually worked out OK, and although someone offered to switch with me in the bulk head I didn’t think being away from Shawn was a smart idea so we stuck closer together.

Shawn said he thought the flight went by faster – he watched a couple movies – but to me it was much longer. I guess because the cabin never got dark? I watched three movies (which is three more than I’ve seen in a million months) and three TV shows (I watch plenty of TV). Jane napped a little bit and was generally good. There was another baby on board who cried a lot, and I was glad it didn’t cause a ripple effect.

Touch down in Atlanta and we have plenty of time for our transfer, which is good. My suitcase didn’t make the flight, even though Shawn’s did, so I was all twisted up about that. There was another purple suitcase in the baggage area, so I convinced myself that the owner of THAT suitcase had absconded with mine.

The jet lag was starting to hit me too, with a headache (not enough water on the plane, since we didn’t have time to buy any in Paris and we couldn’t bring any of our German water through security there) and dizziness. At one point I said “I’M DONE” as I kept walking forward.

We checked Shawn’s suitcase and the stroller through to Baton Rouge and waited at the counter while the agent figured out how to issue Jane a ticket. (UGH!) Then we were on our way through security (three countries, three flights, three security experiences) and on to our connecting flight.

There was a downpour while we waited, so we were sure we’d be delayed. Jane crawled around like a crazy person while Shawn was away changing our Euros back to dollars. She was seriously trying to get away from me and into the action of other people, even though at the guest house apartment she’d been kind of clingy and not wanting to be in a room by herself. 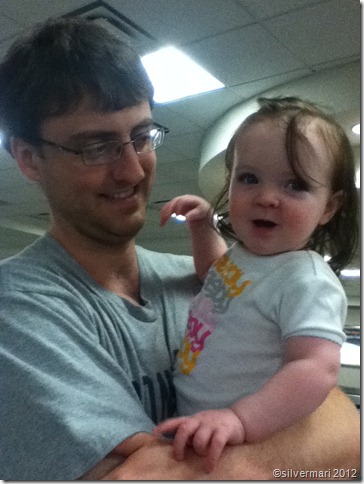 I changed Jane into PJs and we boarded our final flight. By this point it was middle of the night in Germany and about 8:30 in Atlanta. Jane fell asleep before we took off and slept until we landed, so that was really good.

Finally back in Baton Rouge, waiting on our luggage and Katie comes to pick us up. I’m hoping against hope that my bag somehow made it without me seeing it in Atlanta. No such luck. Shawn’s bag and the stroller made it though. Shawn files a claim while Katie and I pack up the car. We drop off Katie and go back to our house, which is cool and comfy, thanks to Katie adjusting the thermostat for us.

The house was still standing, although my zucchini plants died a withering death of some sort and some of my window box plants weren’t looking so great either (they live under eaves and don’t get regular rain fall … I forgot to move them to the lawn to remedy that).

Jane fell asleep in the car and stayed asleep after the transfer to her crib. Shawn and I both crashed out, and it was about 10 pm Baton Rouge time. All together we had been up for nearly 22 hours. Not quite as long as the trip to Berlin, but still enough to leave us fuzzy.

My suitcase arrived two days later, after much stressing and fretting on my part. So dumb to be so attached to THINGS, but not sure how to change that attachment.

The jet lag has been killer. Jane is adjusting the best of all of us. Shawn and I both had to start work the day after we arrived. So after about 7 hours of sleep after the 22 hour trip we were up and at ‘em.

Jane is so happy to be home and see all her toys. And to get a proper bath!
Thanks for sticking with me on this series. I know I haven’t captured everything, but I hope this can serve as a travelogue and reminders of our trip. One day Shawn and I will tell Jane these stories. 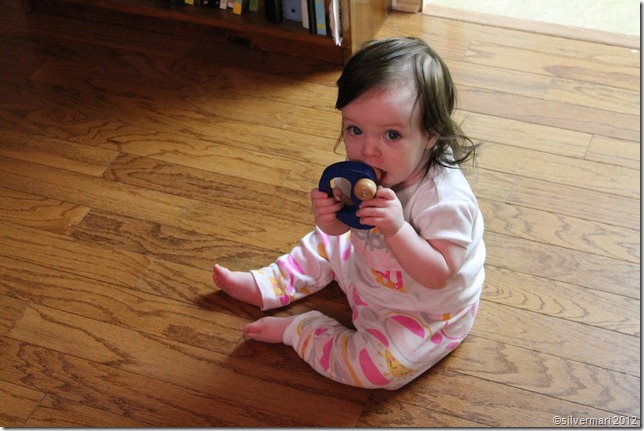