Things I Bought That I Love: Cool Towels 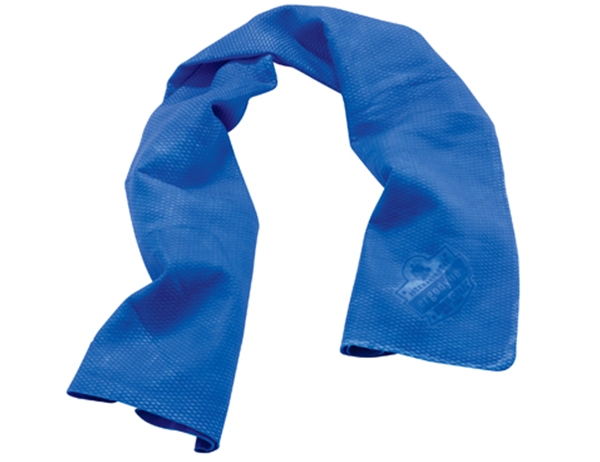 I had never heard of cool towels until my aunt came to visit this year. We spent at least one steamy day in New Orleans, and having the cool towel was essential for keeping the baby cool (not to mention dealing with hot flashes).

I've since bought two -- one via Amazon (referral link) and one that I found at my local grocery store (hello, Winn Dixie) on sale. Once you find out about something you start seeing it EVERYWHERE.

Anyway, these things are supposedly 20 degrees cooler than ambient air, and all you do is wet them, wring them out and then store in their plastic tube until ready to use. Pull them out, shake them for 20 seconds (I just do 20 shakes) and they really are cool. And they feel good for wiping off sweat

At the park Jane will say "coo, coo" until I give her one of the towels (she will also hoot a little like an owl, because towel=owl in Jane's world right now). Her poor face gets so red when she's overheated. I know the towel can't completely cool her down, so we don't stay outside long now in these hot-hot-hot southern Louisiana summer days. But it's nice to let us get out a little bit (and having one for me helps me be a slightly less cranky mama when outside).

I also think they'll be VERY handy in hurricane season if we lose power again. Last year we filled our tub with water to wash with in case we lost water too, so dipping the towel in that to recharge wouldn't be a problem (also, we never lost water). Here's hoping we don't need the cool towel for that now that we have them!

I really think there's a market for garments made out of this material. Think about maternity shirts -- or my personal favorite a poncho. I guess those would be harder to shake and activate...
at June 23, 2013

Email ThisBlogThis!Share to TwitterShare to FacebookShare to Pinterest
Labels: tibtil

I love mine too. I keep it in my car and it has saved my life (or at least my sanity) twice.