I made Jane a pinwheel baby mobile, thinking it would be clever and cheap. Uh ... between what was spent on a couple versions of fishing line (that I gave up using in the end), the star brads, the scrapbook paper and embroidery hoop it was probably about the same cost as a store bought mobile. The yarn is from my stash. But now we have it, and Jane seems to like it OK. 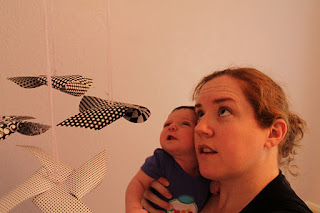 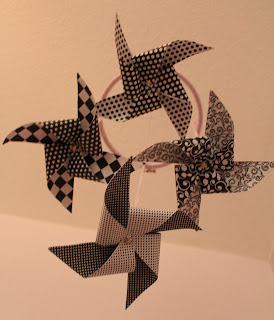 Basically I cut down 12x12 scrapbook paper to 3x3 squares. I used double sided tape to put two designs together then followed this tutorial to make pinwheels.

I wrapped the embroidery hoop with the yarn, and then after trying and failing to assemble the mobile with fishing line I used the yarn to connect the pinwheels to the hoop (using graduated lengths) and to make a loop at the top to hang from the eyelet hook that happened to be in Jane's ceiling.

For not being very complicated it sure took me a long time to get it completed (I started this early in the third trimester).

I didn't think the pinwheels would turn because the brads were too short to allow that. But the yarn itself twists and the pinwheels can spin up if you blow them and then spin the opposite way as the yarn unwinds itself. And I've got tons of black and white scrapbook paper leftover to play with.
at December 10, 2011

Completely adorable. And seeing you with Jane just makes my heart smile.