Home is Where The Heart Is 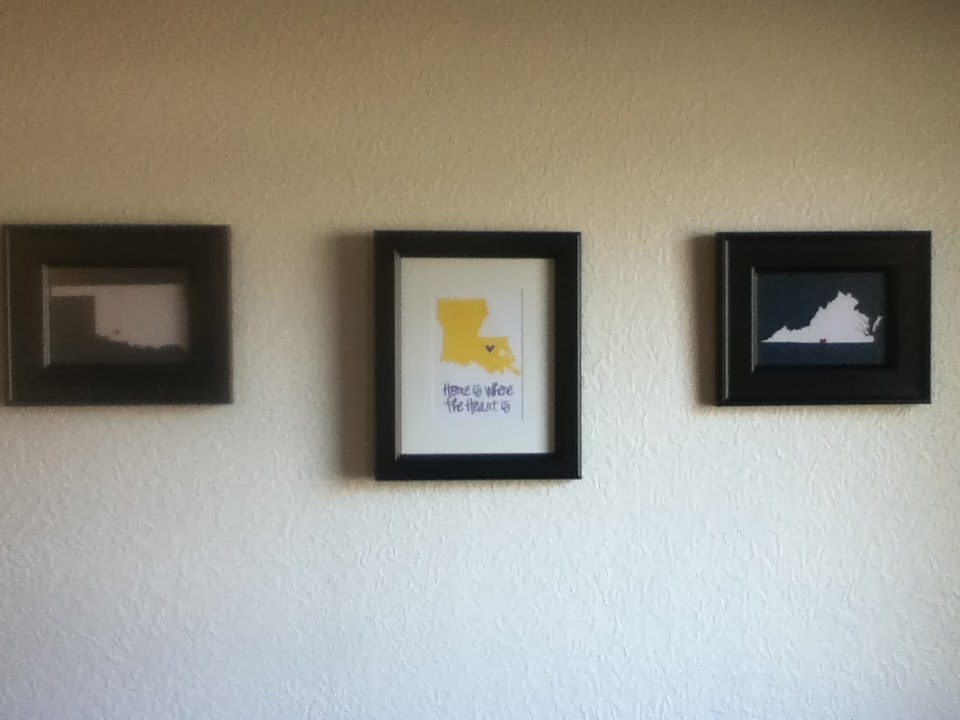 I sort of went down a rabbit hole accidentally while Christmas shopping. My Oklahoma family has started doing a "clean" Santa exchange in lieu of buying gifts for everyone. I decided to try to buy something fun and artisan or somehow support a non-corporation.

While I waited for my chance to go to a local arts market (where I eventually bought a custom wooden cutting board and a tin of Louisiana pecans for the gift exchange) I perused Etsy and found a couple potential things. While I was looking I found a really cool letterpress print of Oklahoma, and I decided I wanted to get it. I had a $5 Etsy gift card somehow, so click-click-click I got it.

I thought I would also get versions for Louisiana and Virginia, but the artist didn't make those states as her prints. I found some other state prints that were cute, particularly the Home is Where the Heart Is series. I ordered that in the Louisiana version with the heart on Baton Rouge (and had a great experience working with the designer, who gave me digital proofs to show me what it would be like -- originally it was horizontal but I was envisioning vertical because that's how the OK letterpress one was ... in the end I should have gone with her original design). I also ordered a Virginia print from a different sellers' State Heart series, but I didn't think about its orientation. When it came horizontal I decided that I needed a matching Oklahoma one to make the heart theme complete (instead of the vertical "wind come sweeping down the plain" letterpress one).

After I ordered a three-5x7-opening frame that would no longer work because the prints varied in orientation I picked up some frames at Target (on sale, but still), and decided to put the vertical Louisiana one in an 8x10 with a matte. The second Oklahoma print came just before we left for Oklahoma, so I put everything together, wrapped it up and slapped on a "To Shawn" label, as if to make it seem intentional. Oh me.

(To add more insult, I realized as I was putting them in frames that I absolutely could have done state outlines with hearts placed on them then had them printed at Kinko's or something for pennies. That's basically what the OK and VA ones are, although I guess I can feel good about supporting a small business.)

Shawn hung them up on the wall next to our front door, and I like them a lot. I might want to add some other family photos to the arrangement. Or maybe I'll just leave them as is. I still have the original OK letterpress print that started this out. It looks cute in a frame on a shelf in the sunroom.

I'm trying to detox from such frivolous shopping right now. It's hard with all the sale emails that keep popping in my inbox. (There's a Walgreen's free - just pay shipping - brag book that I'm passing up!)
at January 03, 2014