2013 was actually an OK year for me. Professionally speaking I made zero strides, and I'm probably reversing my marketability every day, but otherwise it was a great year. (Actually I have done a couple side jobs that should help me from being completely unemployable in the future.)

Jane continues to develop and amaze me (and frustrate me) on a daily basis. She's a cool kid and so much fun to be around. Shawn's very happy in his career, and we both like our hobbies (woodwork and crochet). All told we're doing well.

We didn't do quite as much traveling in her second year as her first. We began the year with a short weekend trip to Memphis to visit some friends. We drove to Oklahoma twice -- once for Mother's Day and also for Christmas. We did a two-week trip to Minneapolis in July that was a lot of fun (although that's when American Airlines severely damaged our stroller). Jane and I flew to Oklahoma in August while Shawn was overseas. And we were gone for three weeks in October/November for an East Coast trip to DC and visiting my in-laws. We spent two weekends in New Orleans; one in February and one around Jane's birthday in November.

I thought about making this handprint calendar with Jane after it was sent to me on Facebook. Jane's never worked with paint before, so the idea that I could get 12 good looking handprint images is a bit ambitious. I am tucking it away though with the idea that we could make several of these at the end of 2014 as gifts. Surely by the time she's 3 she'll be able to follow directions and be a bit crafty? (And/or maybe I'll be less gun-shy about tackling such a big project.) 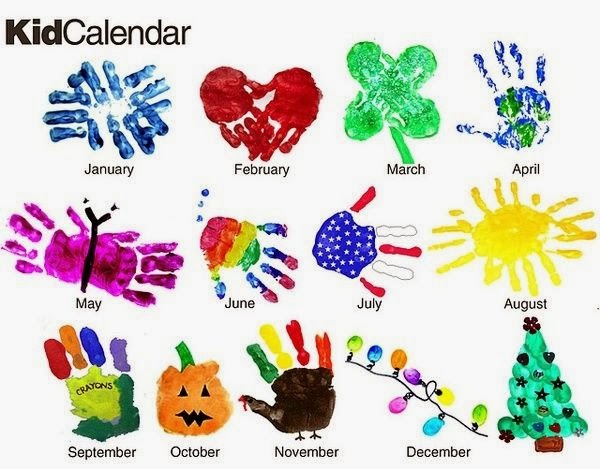