Jane  has decided she wants to ride the bus to and from school. It's about a mile away, and bus service is part of free public education here.

Yesterday morning the bus didn't stop for her as it was supposed to so we drove her in. She was really upset, as upset as she was when she found out she couldn't start school on Monday. But she DID get to ride home on the bus, and that was "amazing," she said.

She told me about the ride and how her friend from class, Braden, helped her know where to go and so the other kids on the bus said "Braden's got a girlfriend." UGH. She thought it was funny and said he's her best friend.

Before he let her get off, the bus driver confirmed her address with me. I asked if it was the same place he would pick up in the morning. He said "no," shut his window and drove off!

This morning, it was snowing, and I was glad to not have to drive her to school on possibly slick streets. I still have to bundle up Livia and put her in the stroller, and we waited on the street for a few minutes since we didn't know EXACTLY where the bus would stop (the stop the school gave us is wrong, wrong, wrong).

We ended up having to run to catch the bus as it sped past us and stopped half a block down. I don't know if that's where it normally stops OR if it stopped because we chased it. The driver (not the same one as the afternoon route) acted like he didn't know there was a new kid to pick up.

BUT Jane got on the bus and presumably made it to school, since the bus sign said her school name, I told the driver where she was going AND I haven't received a call that she didn't make it in! It's still so weird to be a step removed from Jane's school life. I know it's normal, but the weather and the newness of our living situation are combining to make some serious anxiety for me. 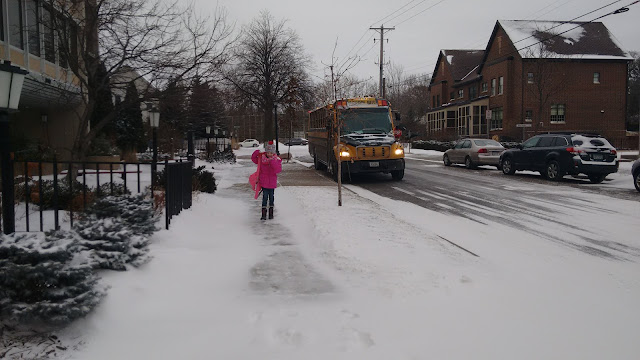