The world is burning, and the tax bill is going to break us all. (Handwritten edits?! In a 500 page PDF?! To be voted on in mere hours?!)

But here are some things: 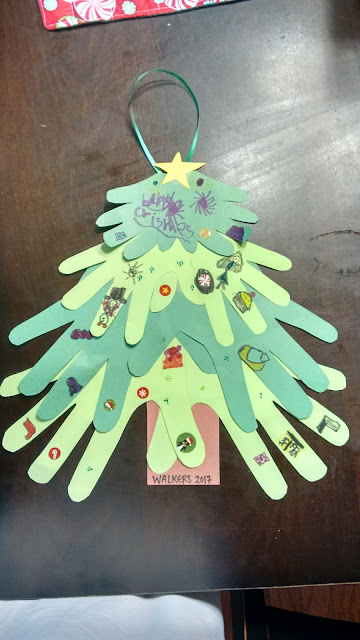 Jane's Kindergarten class has a Christmas tree. I'm surprised they used that verbiage, but that's what it's called. They asked every family to make an ornament to hang on it -- something that represents the family and their traditions. I thought and came up with this -- our hands creating a tree that Jane could draw on and add stickers to show things that are our Christmas traditions. Originally I thought of hobbies too -- like a skein of yarn picture from one of my yarn catalogs, some woodworking contraption from one of Shawn's catalogues, etc. But Jane didn't want to wait to take it in and wasn't really interested in that either. She didn't want photos of us (I was thinking small, as if they were ornaments on the tree), so this is it. There are books because we do the Advent book-a-day tradition, plus a candle, Baby Jesus, an angel, etc. I'm not sure what all Jane drew. The ornament is big, since our hands are real-size, and I figured TOO big -- I had to send it in her backpack in three folders put together with binder clips so it wouldn't get banged up too badly. Jane said the teacher said it was perfect, so I guess the tree is big enough to hold it.

My question -- what if a family doesn't celebrate Christmas? 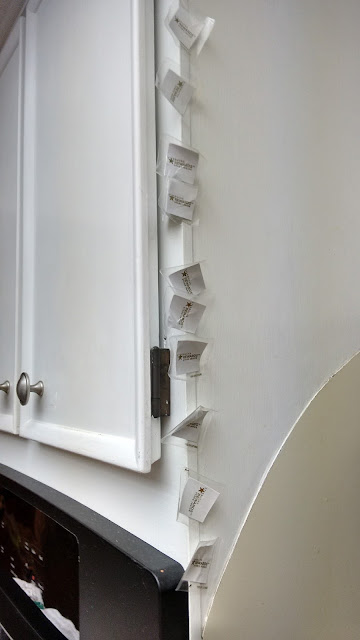 I never got my free Starbucks birthday drink that I normally get via the app. Perhaps it's because I do this with the stars that come off the bags of coffee I buy instead of inputting them in the Starbucks system? CURSES! 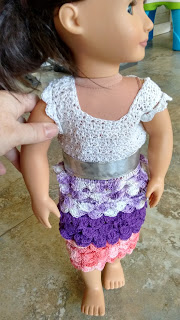 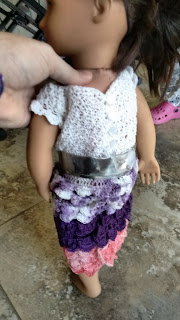 A completed crochet doll dress, front and back. It's not exactly like the pattern, which I got from a book. I had to make up my own top using the suggested stitch. I followed the top's pattern but got this weird almost E-shaped piece and the next direction was "sew shoulder seams" without an explanation as to what the seams were. Maybe I am a visual learner, because a picture could have really helped. Instead I just started my own top right into the skirt part. It worked out fine, although could have been better fitted. I didn't do great on the starting chains, so put a Christmas ribbon around her waist for the pictures. If we can find a solid purple ribbon to sew onto it that would be good. The buttons were $2 from Walmart, but otherwise the cost was nil. I used Gran's thread, which is why the colors are kind of weird. The original pattern had three sets of four ruffles in the skirt in shades of blue, but the designer crochets tighter than me, because it would have made my skirt too long. I could have stopped at the dark purple, but didn't realize it until after I'd done the pink. Oh well. It's fine as it is. I should take better pictures for my Ravelry page. These were fast on my phone because Liv was on the move. She's been a terror -- broken three or four Christmas things, and we haven't even had the Xmas stuff out for a week yet!
at December 01, 2017