It's been a hard working Christmas for me in the kitchen. Since the day after we arrived in Virginia I've been making something every day. And nearly every step of the way something has gone wrong. 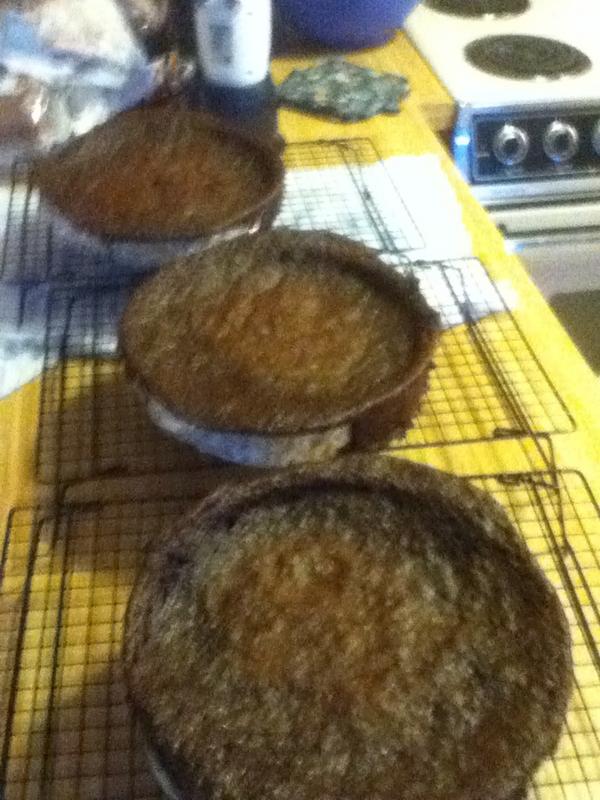 It started with the cake. I'd seen a recipe in a magazine and didn't think it seemed too hard. But the payoff looked gorgeous -- like it always does in magazines. After making the cake batter to perfection I was thwarted when the cakes rose over the sides of the pans and made the bottom of the oven super messy. Luckily there was foil on the bottom of the oven so cleanup wasn't too difficult. But the cakes were pretty much useless -- too soft in parts and crusty in others.They really seemed like brownies in consistency.

After pondering a while I gave up and decided to bake a regular box cake in two layers and go ahead and make the cream cheese frosting. With the excess frosting I mixed the half of the ruined cakes to make cake balls (kind of gross, and I never bothered to cover them in chocolate candy coating like you're supposed to ... so they ended up in the trash ... maybe it only works with store bought frosting?). 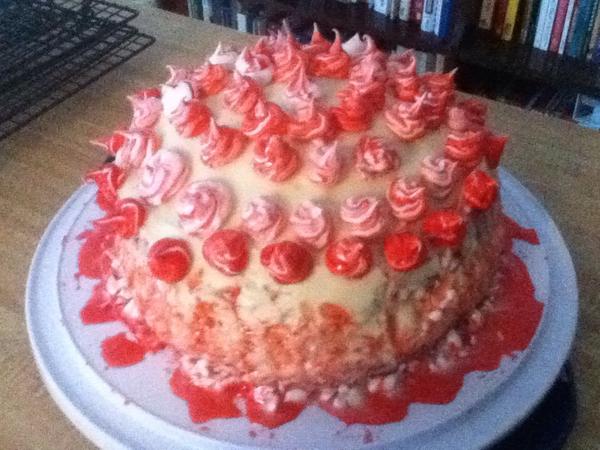 But the box cake turned out OK -- domed but OK. I iced the two layers and then did the decorating -- pressing crushed candy canes around the sides. I also made peppermint red-and-white meringues for the top. While the meringues dried, I left the cake on the counter with the candy canes in place. It was covered in the cake carrier and when we got back the candy canes had melted, leaving the sides of the cake pink and a puddle of goo underneath. YUCK.

Little did I know that cream cheese frosting must be refrigerated. SO that solves the mystery of the melting candy canes (I think?).

We went ahead and ate the cake at a family party and it didn't get an awful reception. It was just sad sitting next to a pristine bundt cake that was on a plate made out of actual peppermint candies. Pinterest much? Oh me.

There have been similar fiascos as the cooking has continued. We never had exactly the right tools -- missing a rubber spatula, no big mixing bowls, it takes more than 30 minutes for water to boil on her stove, etc.

In addition to the cake I also made cream cheese cutout sugar cookies. I've had that recipe from my aunt for 10 years, so they turned out fine -- although it didn't seem like it made enough because I used such a giant cookie cutter (I brought one from home just in case ... and lucky for me because my m-i-l couldn't find her cookie cutters either). 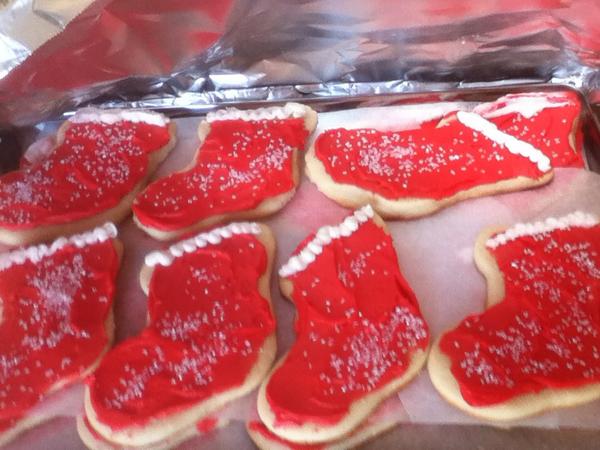 Other desserts included banana pudding pie, pumpkin pie and pumpkin cheesecake. As of this writing we've only eaten pumpkin pie -- and it was only OK. I think a problem is that Shawn's grandma's recipe calls for "milk" and I'm pretty sure she means "evaporated milk" -- which is a game changer. It still set up and tasted right. It just wasn't as dense as it should have been.

The banana custard for the pie was difficult, and I'm not sure I did that right. It said to bring it to a boil after it thickened ... but with the stove not being hot enough it thickened and would not boil. I wasn't sure if I was supposed to keep cooking it until it was a thick unmoving block ... but that's where I was headed so I stopped. I'm not sure if I overcooked or undercooked it. In any case it doesn't look like the picture (let's be honest, none of my recipes do).

For dinner we had
I am wiped out. Still need to make whipped cream for the pies.

I don't think I want to be making this meal again in any kitchen but my own. And even then ...