“If my life wasn’t funny, it would just be true—and that’s unacceptable.” -- Carrie Fisher in Wishful Drinking (and other places I'm sure)

My life isn't on par with Carrie Fisher's in the funny department, but it feels like I'm living in a sitcom sometimes, without the resolution-in-30-minutes.

Our sink is still out of commission, and a week later we're still brushing our teeth/washing our hands in the kitchen. It adds a few steps to my day, so I guess that's not a bad thing, but I gag a little every time I spit into the stainless steel of the kitchen sink. Vom-dot-com. The missing part is still missing, and I don't have an update from our super or the handy man about its eventual delivery. The handy man said the sink should just be replaced, but somehow I doubt we'll see that in our tenure in this apartment.

Anyway, today I'm brusha-brushing (as Owen might say) and took my glasses off, setting them on the side of the counter to rinse my face afterward (another Vom-dot-com-worthy task). I put the glasses back on my face and I can't see! And I'm only half-awake so I think maybe one of my eyes suddenly got a whole lot worse, when I realize that the lens has popped out of my glasses! 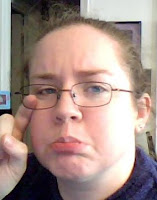 This is not the first problem I've had with these glasses, and their short-lived PRADA predecessors. I've rigged them to be able to see well enough, but a trip to Lens Crafters is in my immediate future. I found the screw and maybe they can put them back together (I tried and the screw didn't want to hold, so it may need a new one). I would put in contacts BUT I think my left eye really has changed because I can't see as well in contacts as in glasses because of the left eye. Since it's the right lens that popped out maybe I could wear the right contact plus my glasses with only the left lens. What a riot ... or not.

Oh, and my office is closed today for the snow, which I thought could happen but didn't know for sure until I'd already worked a couple hours. Not that it makes sense for me to lay out ... I can work despite the weather and so I am.
at December 21, 2009

Your life is funnier than Carrie's. I think the one contact with one lens glasses would work. I look forward to reading "the rest of the story."