Berlin with Baby: Getting There 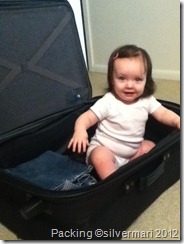 August 4 & 5 -- Preparing to travel overseas with a baby gave me plenty of reasons to indulge in my love of list making. Things to pack and things to buy on top of lists of souvenirs to buy and post cards to send.

In the end nothing could have prepared me for the weariness of travel – overnight travel switching time zones by 7 hours on three planes (to Atlanta, to Paris, to Berlin).

Our friend Katie gave us a ride to the airport in Baton Rouge – we picked her up so we didn’t have to hassle with transferring a car seat (or adding to our already staggering luggage count). We are grateful for the big favor – vielen dank!

We arrived at the airport with plenty of time to spare, which we needed because there was an issue at the counter with issuing Jane’s ticket. In the end we got it, but it cut into our lunch time a bit. After the easy security where everyone ooohed over Jane (“man killer already, I see”) we were able to eat in the gross little café in the BR airport – overpriced ham and cheese sandwiches. It actually worked out OK for the timing.

Jane did well on the first flight to Atlanta. She and I were in a window seat, and she was interested in watching as we flew up away from her hometown. I thought she would sleep but she didn’t. 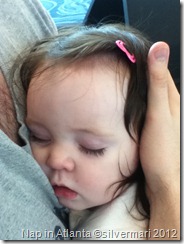 We had a long enough layover in Atlanta and didn’t have any trouble finding our gate. Jane was able to crawl around and look out the windows, and I even got one last decaf iced Americano with skim before we boarded for the long flight. Shawn was able to get her to have a short nap too.

We had to check our stroller at the gate in Atlanta, only to find out that it would be checked through to Berlin (and since we didn’t use it in Baton Rouge or Atlanta we could have just checked it with our baggage instead of carting it through security). So no picking it up in Paris, for what we knew would be a wild ride at Chuck Doo-Gull airport. (Really Charles de Gaul) 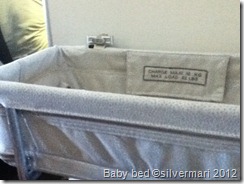 We requested bulkhead seats, and the request was granted, which was good because it gave us more room at our feet for Jane and the addition of a baby bed. It mostly served as toy and blanket storage because Jane was almost too big for it and almost too heavy (22 lb. max). It also could hold a tray of food so we could take turns eating.

Because there was no storage at our feet we had to choose our bag of tricks carefully. I had toys and books for Jane, but only a few could be out and the rest stored above in our bags. It was possible to get things out of the overhead, but less than ideal. We had a free seat next to us that also allowed for overflow storage, and we hope for the same for our return.

Jane also got her own seatbelt that attached to mine, so that was pretty cool. One of my coworkers was guilt tripping me about flying with a lap baby (unsafe! everything in the plane is strapped down EXCEPT your baby!), so the belt made me feel a little better about it, I guess.

Shawn and I took turns holding Jane, and we were each able to get her to sleep once. All together she probably slept 3 hours of the 8+ hour flight, but I didn’t sleep at all.

The Paris airport was as expected a nightmare. We’re convinced it was engineered in the least logical way possible. I also think it must be the way Parisian women stay thin… We had to walk quite a bit – from one terminal to another – and then once we got to our gate we were bussed back in the direction we had come to actually get on the plane.

Customs was a breeze, as we were allowed the priority access line because of Jane. However the regular line wasn’t that long either, I think because it was a Sunday morning. The rest of the airport was pretty crowded though. And it was surprisingly dingy on top of its illogical layout.

Silver lining: for the most part the employees at the airport were helpful, although some of the signs were outdated or flat out wrong (ticketing meant information only in one case, and baggage drop off only meant ticketing in another!). There were also a lot of stairs – up and down – so I was glad we didn’t have the stroller for that. But nothing was handicap accessible. One man on our flight had bad legs and was using a cane. It took him quite a while to make his way. I guess there isn’t a corresponding Americans with Disabilities Act in the EU.

We weren’t seated together on the flight from Paris to Berlin, but we did find someone who spoke English who agreed to switch, very kindly. Jane slept hard on this flight, waking up a couple times to cry when she realized we were still in transit. It wasn’t too bad though, and the man sitting next to me was quite taken with her (of course!) and spoke to her in French.

We landed in Berlin, and took the bus to the terminal. Our baggage came right away, but we had to wait around to see if perhaps the stroller would make it. Shawn realized when we were in Paris that the guy at gate check in Atlanta had written down the wrong flight from Paris.

Shawn’s colleague Antoine met us as we left the baggage claim area, and was very kind. He had bought cell phones for us to use while we’re here (since we won’t be together most of the time and might need to communicate). And he helped us getting the tickets for the bus and subway. It would have taken us ages to navigate the computer screen, since it was all in German and we wouldn’t have known what we needed even if it were in English!

I wasn’t my sweetest self after the long travel, and I wanted the stroller, since my arms and back were aching from carrying Jane and my backpack (although I did have her strapped in the Moby). We finally found the lost luggage area, and while Shawn and Antoine chatted about work and setting up the cell phones I sat down to wait. A woman saw us with the baby and let us jump the line. She was very kind and spoke excellent English, so explaining our plight was no problem. She saw the stroller was still in Paris, and we made arrangements for it to be delivered to the guest house, which it was Sunday evening.

We woke up around 7 a.m. on Saturday before we left, and even though we took our time getting up and around by the time we finally made it to the guest house in Berlin around 2 p.m. on Sunday, I had been awake for 24 hours. Even in Jane’s earliest days I don’t remember feeling as crazy tired – we would still get an hour or two of sleep at a time and were never walking, walking, walking or sitting in small cramped seats. My vision was starting to play tricks on me and the ground seemed to wobble, as if I were on a ship. Shawn was better able to keep it together and navigate – with the help of his colleague.

Jane fell asleep again in her Moby on the bus ride and stayed asleep during her first subway ride. When we finally made it to our room she was EXCITED to no longer be in transit. She shrieked and climbed on us while we rested. Shawn got her to sleep and we all slept for a few hours before finding dinner.

After we ate we were able to stay up until 8 p.m. We woke up in the night once with Jane and had a little trouble falling back asleep, but once we did slept through until 8 a.m. So hopefully it won’t be too hard to be fully in this time zone. Jane seems to be adjusting so far and just woke up from a nap as I write this.
at August 20, 2012